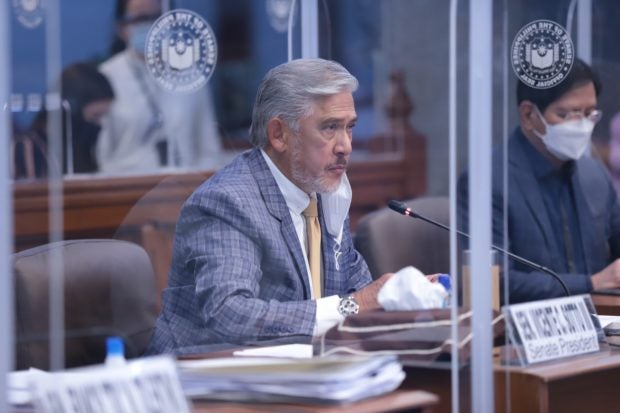 MANILA, Philippines — Senate President Vicente Sotto III on Friday said he is not yet convinced that Charter change (Cha-cha) is necessary amid moves to amend the Constitution.

“I have yet to be convinced that we need a Charter change. When you say kasi charter change, we have to change the Constitution, not just Charter amendments,” Sotto said in an interview on CNN Philippines’ The Source.

“Right now, I am not convinced that we need a Cha-cha, perhaps we need ‘cha-cha:’ character change. That’s what the country needs. So C-H-A C-H-A ‘din yon. But different pronunciation,” he added.

In the upper chamber, Senators Francis Tolentino and Ronald “Bato” dela Rosa earlier filed a resolution seeking to convene Congress as a constituent assembly to introduce “limited amendments” to the Constitution.

A similar resolution has been filed in the House of Representatives by Speaker Lord Allan Velasco.

He said he already talked with other senators regarding the proposed resolution filed in the Senate but said they “did not arrive on anything concrete.”

“I made some calls even about two weeks ago, when the resolution was brought up… I talked to other members…I did discuss it with [Senate Minority Leader Franklin] Drilon and we talked about the procedures, the possibilities if ever we do so,” Sotto said.

“We need three-fourths votes to approve any amendment to that effect and we will insist on voting separately, we will insist that nothing is taken up outside the economic provisions. But that was it, it was just plain talk,” he added.

Asked about an earlier suggestion from Senator Francis Pangilinan for an all senators’ caucus on the matter, Sotto said he would most likely call for one but only after the House of Representatives acts on the counterpart resolution in the lower chamber.

“Perhaps I will [call for a caucus] after the House acts on it. If they do approve it in plenary and they declare themselves into a constituent assembly properly, then we will discuss the matter as a whole, as the Senate,” Sotto said.