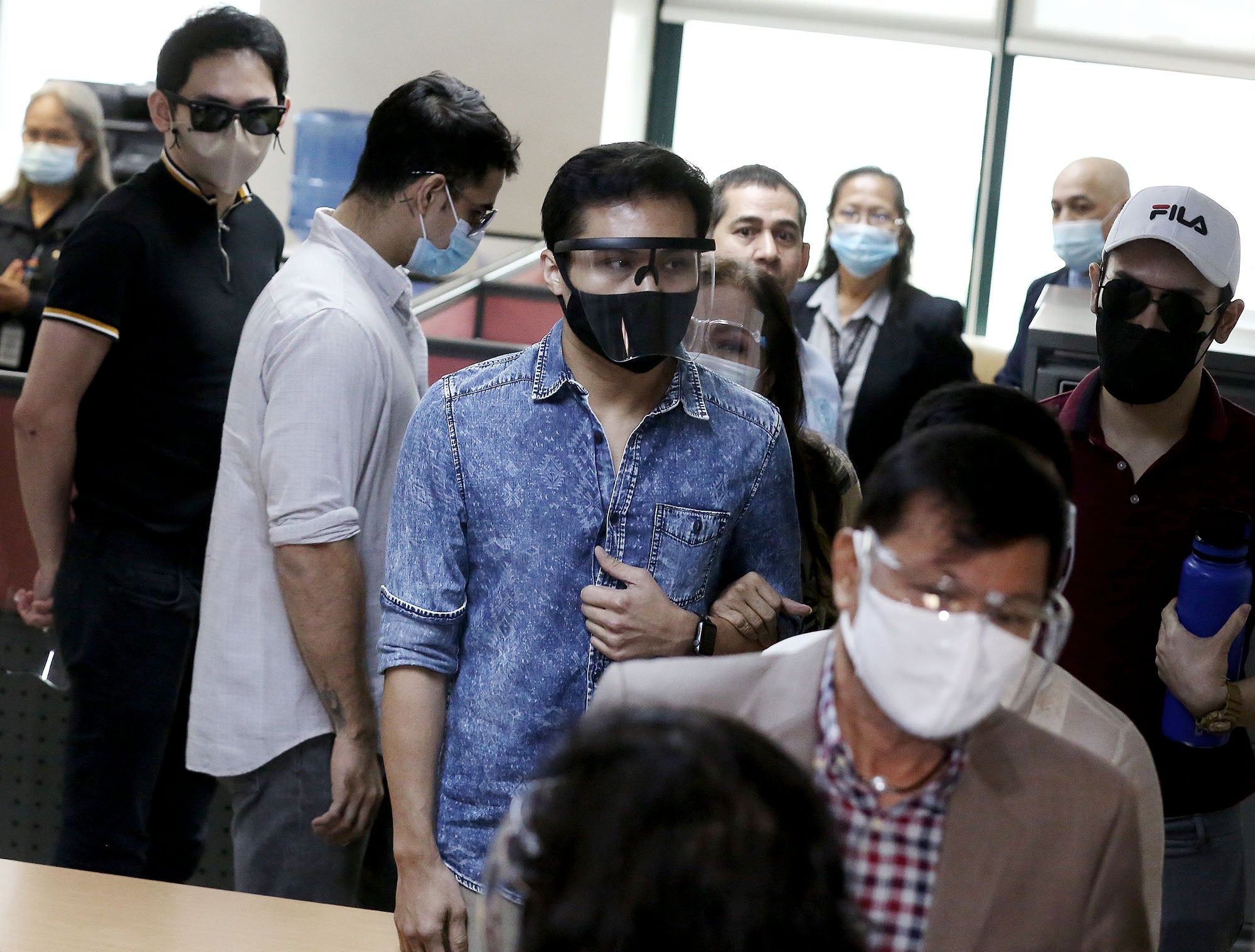 PRELIMINARY INVESTIGATION Seven of the 11 respondents in the police complaint of rape with homicide in connection with the death of flight attendant Christine Dacera on New Year’s Day leave the Makati Prosecutor’s Office, which began its preliminary investigation on Wednesday. They include (from left) Rommel Galido, John Pascual de la Serna III, Gregorio Angelo de Guzman and Valentine Rosales (far right). Also present were Dacera’s family and officers of the Philippine National Police, together with their lawyers. —RICHARD A. REYES

Two of the 11 respondents in a criminal complaint filed by police in connection with a young flight attendant’s death after a New Year’s Eve party in a Makati hotel have recanted their statements that illegal drugs were used during the overnight revelry.

According to their lawyer, De la Serna and Galido were pressured to state in their affidavits that there were drugs in the party at Room 2209 of City Garden Grand Hotel, hours before flight attendant Christine Dacera was found unconscious in a bathtub.

Police filed a complaint of rape with homicide against De la Serna, Galido and nine other people in the Makati City Prosecutor’s Office on Jan. 4, and declared the case “solved.”

On Jan. 6, the state prosecutors found the police evidence “insufficient” and ordered the release of De la Serna, Galido and another arrested respondent, John Paul Halili. They, however, scheduled preliminary investigation hearings on the case.

“There were no drugs [at the party],” Portugal said. Her clients “were pressured [to make admissions], otherwise they said the police wouldn’t free them,” she said.

“It was added by them (Makati police), after subjecting the two detained to mental torture and misrepresentation, that they will be released from detention and that no charges will be filed [against them] if they will come up with fabricated, tampered afterthought and object of scientific, medicolegal evidence,” she said.

Galido, De la Serna, Rosales, Rapinan and De Guzman had undergone drug tests and the results were negative, according to their lawyer.

They disputed the first autopsy conducted by Police Maj. Michael Nick Sarmiento, the medicolegal officer of the Southern Police District-Criminal Laboratory Office, which stated that Dacera died of a natural cause, particularly of ruptured aortic aneurysm.

Based on his Jan. 2 affidavit in Filipino to police investigators, De la Serna said around 1 a.m. on Jan. 1, at the height of the drinking party, Mark Anthony Rosales (no relations to Valentine) picked a pack of powdered drugs concealed in one of his socks.

Mark Anthony Rosales is also listed as a respondent in the case.

“[Mark Anthony Rosales] invited me to partake with the drugs, but I refused. Later, I saw Mark and Louie [de Lima] already high because of the drugs brought by Mark,” he added.

In a press conference after their release last week, Galido said in Filipino that Dacera had told him that she was feeling something different and that her drink might have been spiked with drugs.

Galido said he asked Dacera who might have done it, and was told that it could be “Mark,” referring to Rosales. Galido, however, dismissed it and went back to sleep.

The Inquirer tried to reach police officials for comment, but they had not responded as of press time.

On Wednesday, the state prosecutors began hearings, with seven of the 11 respondents attending. Dacera’s family and the Philippine National Police, together with their lawyers, were also present.

Neither Mark Anthony Rosales nor his lawyer was present. On Monday, his lawyer appeared before the National Bureau of Investigation, which is conducting its own probe, and assured the agency that he would cooperate.

The city prosecutor’s office granted the request of the PNP for the hearings to resume on Jan. 27. The PNP said it was still awaiting additional evidence, particularly results of the DNA analysis, toxicology and histopath exams, and laboratory tests conducted on Dacera’s body by MMC.

Lawyer Brick Reyes, the Dacera family spokesperson, said they were waiting for the copy of the MMC examinations before the body was transferred to Rizal Funeral Homes in Pasay City for embalming and autopsy.

“We have receipt paying for several tests, and one of these was a blood test. So, hopefully, we get the result and this will guide us on the situation,” Reyes said.

“They believed there was a cover-up,” Reyes said. “There’s a moving hand here to protect some or all of the respondents, and maybe with some connivance with the police investigation.”

City Garden Grand Hotel on Wednesday denied that it violated terms of accommodation as an accredited quarantine when it allowed Dacera and her friends to stay overnight for a New Year’s Eve party.

The Department of Tourism-National Capital Region (DOT-NCR) had ordered the hotel to explain why it should not revoke its accreditation and license to operate following Dacera’s death.

In a letter to the DOT-NCR, the hotel’s acting general manager, Richard Reazon, said Dacera and her companions had booked Rooms 2207, 2209 and 2009 under corporate accounts, which, he explained, “pertained to businesses that were within the immediate local vicinity of the hotel or businesses otherwise permitted to book accommodations.”

“There was no clear indication that these guests knew each other, or made the reservations with the intention of holding a party within the hotel premises,” Reazon said. —WITH A REPORT FROM TINA G. SANTOS

Read Next
DOJ chief on PhilHealth raps: Justice slow, but will be served
EDITORS' PICK
Acer Philippines welcomes you to its first flagship store
Pope Francis to miss events due to new flare up of leg pain—Vatican
PNP’s Covid-19 cases jump to 9,809; 52 new infections logged
New Year, New Rediscoveries
Is your company a growth champion? Stand up and be recognized!
More than 150 National Guard in Washington for Biden inauguration test positive for coronavirus
MOST READ
Former US envoy to PH Sung Kim appointed to State Department
Dustin Poirier knocks out Conor McGregor at UFC 257
Ellen DeGeneres, too, is baffled by viral Filipino soda ad
AFP to apologize to UP alum falsely included in list of NPA members — Lorenzana
Don't miss out on the latest news and information.