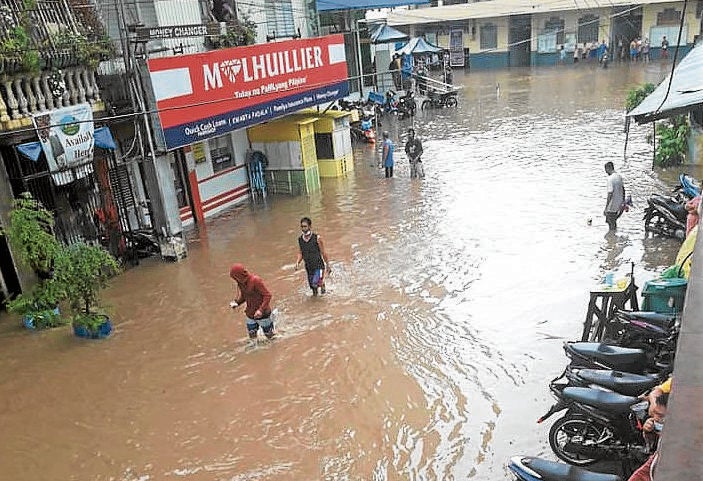 FLOODED STREET Floodwater submerges the streets of Mambajao in Camiguin province amid heavy rain in parts of Mindanao on Tuesday. —KRENCY PEREZ/CONTRIBUTOR

A low pressure area (LPA) on Tuesday brought rain in Mindanao, flooding parts of Mambajao town in Camiguin and causing a series of landslides that blocked a provincial road in Lanao del Norte province.

Nearly a hundred residents took refuge at the evacuation center at noon but returned home after two hours when the floodwater receded, he said.

Photos of people wading in knee-deep water and shoppers stranded outside a mall in the downtown area were posted on social media. Gaabucayan said he had not received any report of damage to property.

Public works personnel began clearing the roads of debris with heavy equipment, while a team from the Provincial Disaster Risk Reduction and Management Office provided food packs and sleeping materials to the evacuees, the police official said.

Aveliza Manzano, chief of the Lanao del Norte Disaster Risk Reduction and Management Office (DRRMO), said Barongison Bridge, which links Bacolod and Maigo towns, was closed to traffic after clumps of bamboo clogged the river beneath it, causing water to overflow.

Provincial engineer Marieta Burillo said landslides were reported in the hinterland villages of Pagalongan in Kolambugan and Poona Kapatagan in Tangkal.

Army soldiers rescued several families and took them to shelters in Maigo and Bacolod towns on Tuesday, according to Maj. Victor Leopoldo, executive officer of the Army’s 5th Mechanized Infantry Battalion.

The Philippine Atmospheric, Geophysical and Astronomical Services Administration (Pagasa) attributed the rainy weather to an LPA that would bring light to moderate rain in Mindanao in the next 48 hours.

Pagasa said there was a slim chance that the LPA could turn into a tropical depression, but nonetheless raised warning levels in the provinces of Caraga, Lanao del Sur and Zamboanga regions, where serious flooding was expected.

On Monday, at least 100 people were evacuated in Tubod as water rose in three villages there.

In the Visayas, the disaster response agency of Eastern Samar rescued families in flooded villages in the towns of Sulat, Maslog, Dolores, Can-avid and Taft.

Local governments, including Tacloban City and Palo town, both in Leyte province, and the provincial government of Biliran and the municipal governments of Caibiran, Kawayan and Naval, all in Biliran, suspended work and online classes.

At least 106 families (523 people) were displaced in Catubig, Northern Samar, due to continuous rain, said Mark Romulo Luz, the head of the Municipal Disaster Risk Reduction and Management Office.

Flooding was also reported in the towns of Dulag, Carigara, Palo and Capoocan.

In Southern Leyte, a major river in Sogod town overflowed.