WATCH: Jogger swims into frozen lake to save dog from drowning 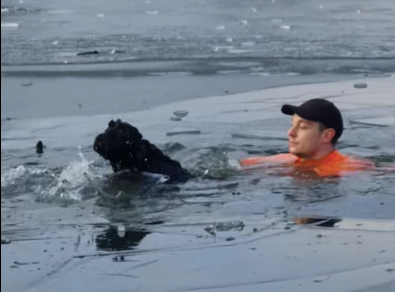 Darcy Pell saves a dog from drowing in a frozen lake in England, United Kingdom. Image: screengrab from Facebook/@paula.town

A jogger managed to save a dog from drowning in a frozen lake before continuing his afternoon run with a friend in England, United Kingdom.

A passerby named Paula Town witnessed Pell’s good deed and took a video of the incident, where Pell can be seen smashing through the ice in the Pontefract Park lake to get to the dog.

After grabbing the dog, he then swam to shore and reunited the poor canine with his owners.

What a hero, this complete stranger rescued this families dog when it got into trouble in Pontefract Park.

Despite refusing to be called a hero, Pell was described as one by Town, who said on her Jan. 9 Facebook post, “What a hero, this complete stranger rescued this [family’s] dog when it got into trouble in Pontefract Park.”

Town said in an interview with the newspaper that she first tried to get on the ice to save the dog, but she kept falling back in.

“I felt panic-stricken and scoured the side of the lake for a life buoy but couldn’t find one,” she was quoted as saying. “Luckily that guy came along, he lowered himself into the water and the rest is on the video.”

Pell was then given a jacket by his jogging buddy then carried on with his run, the report said.

He meanwhile urged others not to try what he did, noting that he is an experienced cold-water swimmer and doing what he did might be dangerous to others. Ian Biong/JB

Read Next
First in Ilocos region: Human milk bank opens in Ilocos Norte hospital
EDITORS' PICK
New Year, New Rediscoveries
Acer Philippines welcomes you to its first flagship store
Is your company a growth champion? Stand up and be recognized!
4 senators want military, cops off UP campuses
PUP accord with DND also faces termination
Joe Biden sworn in as 46th U.S. president, urges end to ‘uncivil war’
MOST READ
A shade at Roque? Vice asserts being a comedian, not a clown
Trump’s parting gifts to Biden: Roaring stocks, a weaker dollar, tons of debt
Graft complaint filed vs Diokno, other BSP execs for P1.75-B contract for IDs
Biden says Trump wrote him ‘very generous letter’
Don't miss out on the latest news and information.