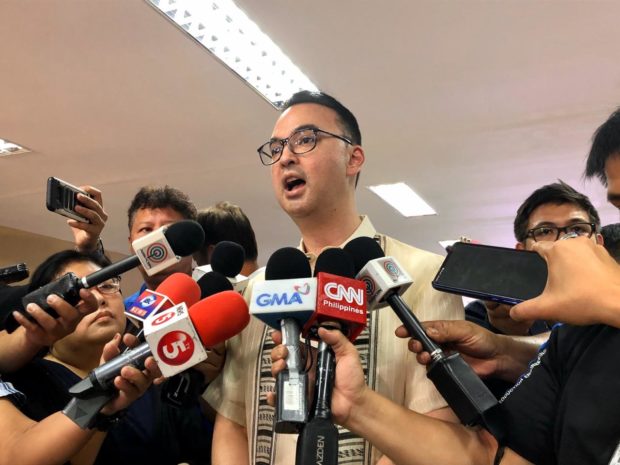 MANILA, Philippines — #CayetanoStopUsingBTS trended on social media on Wednesday as former Speaker Alan Peter Cayetano and his closest allies are set to launch a new bloc in the House of Representatives named after the band.

As of 11:30 a.m., Wednesday, the hashtag remains in the Top 10 trending topics on Twitter in the country, with most of the tweets coming from the ‘ARMY’, or the fanbase of the Korean pop group BTS.

One of the netizens pointed out that Cayetano, who was previously ousted as House Speaker and replaced by Marinduque Rep. Lord Allan Velasco, seems to be riding on the hype of BTS which became the first South Korean group to reach number 1 in the United States’ music charts.

The hashtag became a trend after it was confirmed that Cayetano, together with his closest allies, are set to launch a new “independent” bloc in the House—the “BTS sa Kongreso” bloc.

Named after BTS, the bloc will be composed of Cayetano and his allies who were also stripped off their leadership posts in the lower chamber after Velasco assumed post as Speaker of the House.

Fernandez, who was earlier removed as House deputy speaker following the speakership change in the House, confirmed the formation of the new House bloc.

Fernandez pointed out that before they were removed from their posts, the House committee on good government and public accountability, which was then headed by Sy-Alvarado and Defensor, was planning to hold hearings on several issues in the telecommunication and power sectors.

(We don’t have an investigation, Speaker Velasco didn’t allow it, so where do we get a platform to investigate?)

(This is one of the reasons, that we want to put up a group like this so our voices can be heard, people will know about the present concerns, the basic needs of our people must be addressed–telcos, internet, what’s happening in these sectors.)

Fernandez said it was “alarming” that the investigations that affect many Filipinos—including hearings that were ongoing but were halted—were not accommodated and not given closure.

Nonetheless, Fernandez said that the members of the bloc will remain as members of the majority in the House, as he clarified that they are supportive of President Rodrigo Duterte.

Fernandez also said that the creation of the group is not an attempt to bring Cayetano back to the Speaker post.

(Speaker [Cayetano] has no intention to go back as Speaker. Me, when I was removed, did you hear anything from me? I did not complain, it was nothing to me.)

Defensor also confirmed the formation of the group in a separate message to INQUIRER.net, saying the bloc is an “independent majority group.”

It remains unclear, however, why the group will be named “BTS sa Kongreso.” Fernandez said it will be explained during the bloc’s meeting with the media scheduled on Thursday afternoon.

INQUIRER.net reached out to Velasco and other House leaders for comments but has yet to receive a reply as of posting time.