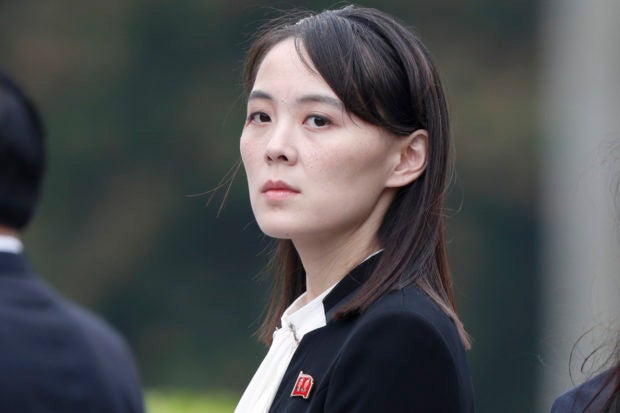 On Monday, Seoul’s military officials said signs were detected that the North carried out a military parade in central Pyongyang Sunday night in time for the eighth congress of the ruling Workers’ Party, which has been under way since its opening last week.

“What is weird is that the joint chiefs of staff of South Korea made a senseless statement that they captured the north opening a military parade at midnight on Jan. 10 and they are in the middle of making precision tracking,” Kim Yo-jong was quoted as saying in a statement released by the official Korean Central News Agency (KCNA) on Wednesday.

“They are the idiot and top the world’s list in misbehavior as they are only keen on things provoking world laughter,” she added.

Kim added that the North is only holding a military parade in the capital city and not conducting any military exercises “targeting anybody nor launch of anything.”

“Do they really have nothing else to do but let their military body make ‘precision tracking’ of the celebrations in the North?” she said.

She warned the South Korean authorities, saying “all these things must surely be reckoned up in the future.”

But the latest statement released under her name indicates she still remains powerful and is likely to handle inter-Korean affairs.

In an earlier session of the party congress, she was also not listed as a member nor as an alternate member of the party’s politburo, sparking speculation of her possible demotion.

Kim last released a statement last month slamming South Korea’s foreign minister over her remarks doubting the North’s claims to be coronavirus-free. Kim said the minister will “pay dearly” and warned that the already frozen inter-Korean relations could get worse. (Yonhap)