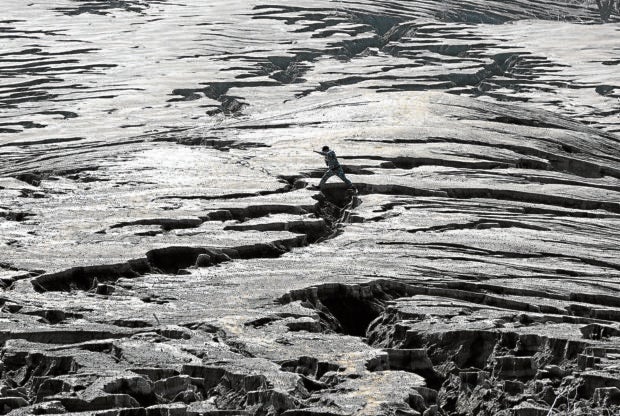 OH MY GULLY A member of the Philippine Coast Guard leaps over a gully amid the desolate expanse of Taal Volcano island. —GRIG C.MONTEGRANDE

TALISAY, Batangas, Philippines — Fresh from an eruption only a year ago, Taal Volcano’s main crater lake was stunning as ever, like a deep, earthen bowl of emerald water.

But the shards of soda and beer bottles, the animal bones half-buried in ash, and the concrete structures reduced into rubble, as seen on the island’s shore were a stark reminder of the horrors of the day the volcano awakened.

The Philippine Institute of Volcanology and Seismology (Phivolcs) said the Jan. 12, 2020, phreatomagmatic eruption that lasted overnight emanated from the main crater, a 1.9-square-kilometer lake within the larger Taal Lake and an erstwhile popular attraction to tourists and international geologists.

The blast marked Taal Volcano’s most recent major activity that forced some 8,000 people, dependent on aquaculture and tourism, off its island or “Pulo” after the government declared it no man’s land.

Experts say the 2020 event was comparable to the 1911 eruption in terms of volume of ashfall and ground fissuring.

When the Inquirer visited Pulo on Jan. 6, the land was still coated in six-foot-thick layers of ash and pyroclastic materials that had wiped out vegetation and erased hiking trails.

Cascading rainwater during the wet season has formed large streaks of gullies, turning the island into what closely resembles a desert.

Yet, Josefina Pordunzalan still longed to return to her former community, as she grappled with the thought that it might take a while, if not ever again. “Life’s better off there. There’s peace,” she said.

She sat on a low, plastic stool outside the tent she shares with two other families of distant kin in a school-turned-evacuation center at Barangay Aya in Talisay town.

Another evacuee, Sarah Jane Aala, 31, asks how one can possibly start over in a classroom with 19 other families and relatives, where “private space” is delineated by stacks of donated clothes and hanging sheets.

The evacuees in Talisay are remnants of over 400,000 who sought temporary shelter until Phivolcs, in March 2020, downgraded Taal’s alert level to 1, which means a significant decrease in volcanic activity but not completely without threat of another explosion.

In April 2020, the Regional Disaster Risk Reduction and Management Council in Calabarzon (Cavite, Laguna, Batangas, Rizal, Quezon) approved the P41.9-billion Taal Eruption Rehabilitation and Recovery Plan for short- and long-term projects over the next two years in affected areas in Batangas and Cavite.

Part of the investment requirement is P11.5 billion for permanent housing of 2,000 families displaced from the island, had lost their houses on the fringes of the lake, or at risk of ground fissuring on the mainland.

Under the plan, the provincial government recommended the resumption of ecotourism on Pulo but only once the alert level is downgraded to 0. It suggested a 300-meter circumference buffer or fish cage-free zone from the island’s shoreline.

“The fissures are a big discussion in the geological community. What’s its origin and second, what would be its long-term effect? Remember, these are highly populated areas (affected),” said Mario Aurelio, director of the University of the Philippines’ National Institute of Geological Sciences.

In Barangay San Teodoro, Agoncillo, Felipe Mortel, 72, had a new bungalow constructed across from the street where his house collapsed during the eruption.

At least five families in his neighborhood had moved out since, he said. 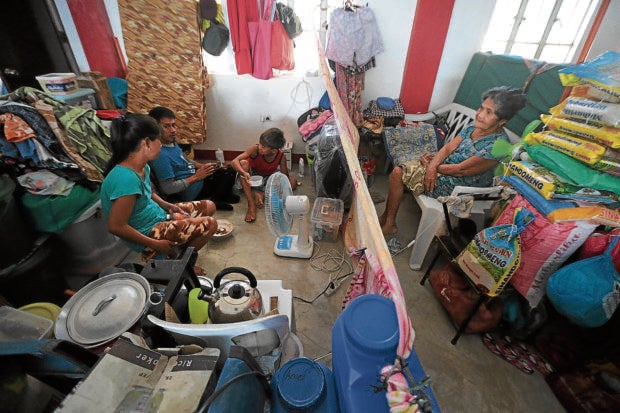 STILL IN SHELTERS Many residents displaced by the Jan. 12, 2020, Taal Volcano eruption remain in evacuation centers a year after the calamity, like these families who have since been sharing space in one of the classrooms at Doña Maria Laurel Platon Memorial School in Talisay, Batangas. Less than two months after losing their homes, they would face another threat—the coronavirus pandemic —while in such vulnerable state. —GRIG C. MONTEGRANDE

Aurelio said the fissuring likely occurred during the series of volcanic earthquakes as the magma chamber moved in a particular orientation that hit the towns of Lemery, San Nicolas, Agoncillo and Talisay.

Phivolcs continues to trace these fissures and document morphological changes (relating to forms or structures) on the volcano island, including a fresh vent on the tourist trail known as Daang Kastila.

On Dec. 5 last year, Aurelio and a team of wildlife biologists and marine scientists surveyed the island. Their findings to form part of the posteruption baseline research.

They also wanted to find out how fast the ecological succession is or the “healing process” after an eruption, said ornithologist and conservation ecologist Carmela Española.

Española said the team saw ospreys and brahminy kites hovering over the island and even Peregrine falcons, an indication of other terrestrial animals left and attracted migratory bird species for food. Herons and egrets were sighted, too.

“There are too many natural calamities and whatever information we find on how fast communities and ecosystems regenerate will help us with policies,” Española said.

The seemingly fast regrowth of vegetation and the animals’ presence in a year’s span is promising. But just like any process of recovery, the scientists agreed that these would take time. INQ