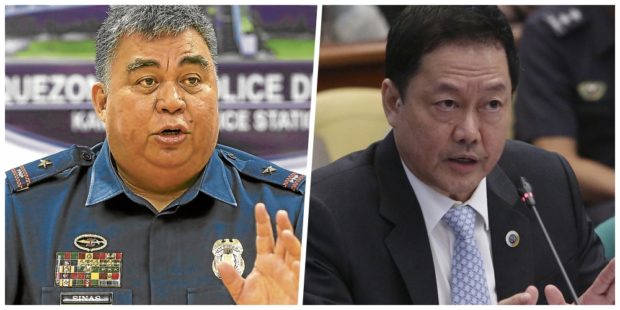 MANILA, Philippines — Justice Secretary Menardo Guevarra said on Tuesday that the nine policemen indicted for the killing of four Army intelligence agents in Jolo, Sulu province, last year were released from Camp Crame despite his department’s “requests” for the Philippine National Police to keep them in custody a little longer.

Guevarra said he had already directed state prosecutors to file an urgent motion in a court in Sulu to secure a hold-departure order against the policemen to prevent them from fleeing the country.

He said the lockdown in Sulu due to the pandemic may have prevented the court from immediately issuing a warrant for the policemen’s arrest after the Department of Justice (DOJ) recommended their indictment on Jan. 4.

“The nine police officers were released from custody despite requests of the DOJ with the PNP to hold them awhile until the arrest warrants were issued,” Guevarra said.

“We hope that the accused will voluntarily turn themselves in when [the] warrants are eventually released by the court. Otherwise, law enforcement agents will look for them and take them into custody,” he warned.

The PNP released the nine policemen from its custody last week after Gen. Debold Sinas, chief of the PNP, approved their dismissal from service on Jan. 1 when they were found guilty of administrative offenses for the killing of Maj. Marvin Indammog, Capt. Irwin Managuelod, Cpl. Abdal Asula and Sgt. Jaime Velasco on June 29 last year.

The policemen were charged by the DOJ with four counts of murder and violation of Republic Act No. 10591, or the Comprehensive Firearms and Ammunition Regulation Act, for planting a gun beside Indammog’s body.

Sinas said on Monday that the nine policemen were released due to absence of a warrant for their arrest.

“We do not want to be charged with arbitrary detention. When I signed their dismissal, it was immediately implementable so we turned them over to their relatives and lawyers last week,” he explained, pointing out that the PNP had no more reason to hold them as they were no longer policemen.

—With a report from Jeannette I. Andrade

Read Next
Manila bans street activities during Santo Niño Feast
EDITORS' PICK
Nestlé Philippines’ ‘NESCAFÉ Plan’ bags Grand Anvil at PRSP 56th Anvil Awards
Smart reinforces superiority with best speed and mobile video experience in PH
Every Filipino home can now be a smart home with realme TechLife
New 3,045 COVID-19 cases push PH total active cases to 40,074
LTO’s P500-M deal for screws draws scrutiny
How to lose a PH genius: Wesley So officially a US citizen
MOST READ
How to lose a Filipino genius: Wesley So officially a US citizen
US lays out list of aid to ‘satisfy’ Duterte following VFA payment demand
Robredo on Sara Duterte leading poll surveys: Why are Filipinos drawn to leadership of this kind?
Duterte order to police, military on Reds: ‘Kill them all’
Don't miss out on the latest news and information.