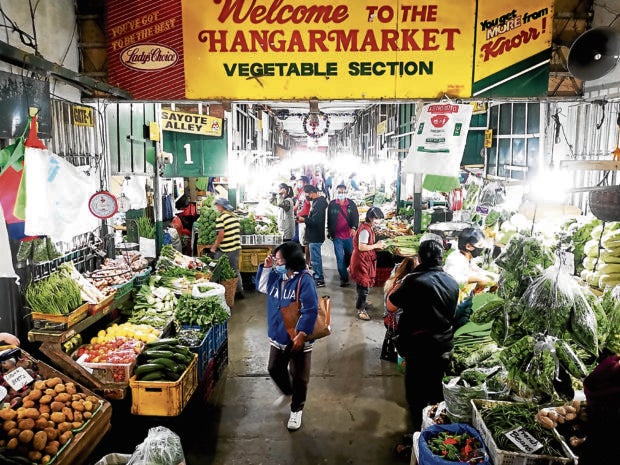 MARKET DAY The Baguio public market is among the busiest areas in the city as vegetables harvested from farms in Benguet province are traded here daily. The local government has started securing COVID-19 vaccines for residents as the city’s tourism-dependent economy tries to recover business losses due to the pandemic. —EV ESPIRITU

BAGUIO CITY—Though the city was assured access to 380,000 doses of the vaccine against COVID-19 in a deal with British pharmaceutical firm AstraZeneca, the local government on Monday said it would donate extra doses to neighboring communities in Benguet province.

The vaccines would be available to 70 percent of Baguio’s targeted population by the second half of this year, Magalong said.

The city is also negotiating another supply deal with Russia’s Gamaleya Research Institute of Epidemiology and Microbiology for 50,000 doses of its Sputnik vaccine, he said.

Gamaleya could deliver supplies by March or by June once the product gets an emergency use authorization (EAU) from the national government, Magalong said. AstraZeneca applied for an EUA, a requirement for the inoculation program, last week.

Baguio residents would also benefit from around 10,000 doses to be donated by members of the local chapter of the Chamber of Commerce and Industry, and 13,000 more from locators of the Baguio City Economic Zone. Another company has committed 10,000 doses for the city.

“More doses may come from a growing private citizens movement composed of families who can afford the vaccines,” Magalong told the city council.

The business community offered to double the volume of vaccines it would buy for their employees so the rest would go to Baguio residents, he said.

Should the city get an oversupply of vaccines after immunizing its target population, Magalong said, “We will give them to our neighbors and the rest of the Cordillera.”

Baguio, with a population of 370,000, is among the priority areas in the vaccination program due to its high COVID-19 transmission rate.

The doses that Baguio would purchase using a P200-million allocation would go to about 180,000 residents.

In Mindanao, the cities of Zamboanga and Oroquieta have also signed separate deals with AstraZeneca for vaccine supplies.

Zamboanga Mayor Maria Isabelle Climaco-Salazar said the city had secured 410,000 doses for about P100 million and would cover 205,000 residents.

The city’s vaccination program targets to inoculate 695,000 people, representing 70 percent of its estimated population of 992,000.Salazar said the local government could use the remaining P100 million of its vaccine allocation to buy other brands.

Dulce Miravite, the city health officer, said the AstraZeneca vaccines would be available around the third quarter of the year.In Misamis Occidental province, Oroquieta Mayor Lemuel Meyrick Acosta said the local government had secured 120,000 doses from AstraZeneca to cover 60,000 residents.

Read Next
Foreign tourist arrivals fell by 84% in 2020
EDITORS' PICK
Is your company a growth champion? Stand up and be recognized!
Joe Biden sworn in as 46th U.S. president, urges end to ‘uncivil war’
PUP accord with DND also faces termination
4 senators want military, cops off UP campuses
Acer Philippines welcomes you to its first flagship store
New Year, New Rediscoveries
MOST READ
A shade at Roque? Vice asserts being a comedian, not a clown
Biden says Trump wrote him ‘very generous letter’
Trump’s parting gifts to Biden: Roaring stocks, a weaker dollar, tons of debt
Makati Shangri-La to close its doors temporarily starting Feb. 1
Don't miss out on the latest news and information.