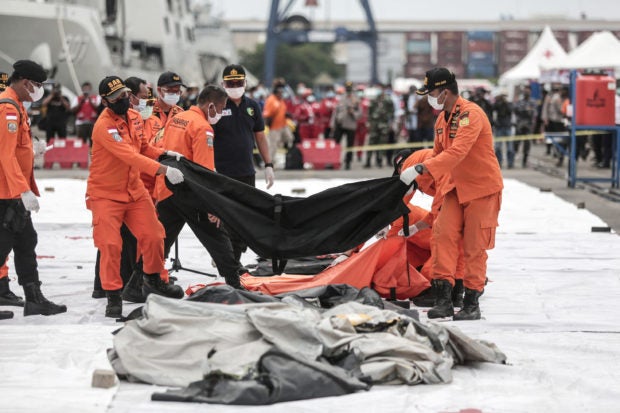 Rescuers lay out body bags containing human remains recovered from the crash site of Sriwijaya Air flight SJ182 at the port in Jakarta on January 10, 2021, following the January 9 crash of the airline’s Boeing 737-500 aircraft into the Java Sea minutes after takeoff. (Photo by ADITYA AJI / AFP)

JAKARTA — Relatives of Indonesia’s plane crash victims formed a grim procession at a Jakarta morgue Tuesday, to give blood so investigators can try to match their DNA to body parts plucked from the murky depths of the Java Sea.

Scores of bags filled with human remains are arriving by the day in the aftermath of Saturday’s crash.

The Sriwijaya Air flight slammed into the sea just four minutes after takeoff, after plunging about 3,000 meters (10,000 feet) in less than a minute.

It is an agonizing wait for some families, who still hold out hope for survivors amongst the 62 people who were on board, including 10 children.

“We haven’t accepted it yet,” Inda Gunawan said of his married brother Didik Gunardi, who was on the Boeing 737-500.

“Our family is hoping for a miracle that he is still alive.”

But Gunawan, like dozens of others, gave a blood sample at a makeshift tent outside the Jakarta morgue, the bleakly-named Post-mortem Command Post.

“At first I didn’t believe the news about the crash,” Gunawan continued.

“But then I saw the passenger manifest. We were in shock.”

Emma Yusja, 54, whose hairstylist daughter Syifa Kamila was in Jakarta to pick up supplies for her salon, was also praying against all odds.

But she too gave blood at a hospital in Pontianak on Borneo island, the flight’s intended destination.

“We’ve given samples,” she told AFP.

“I still hope for a miracle that my daughter is alive, but I’ll accept whatever Allah decides for us.” 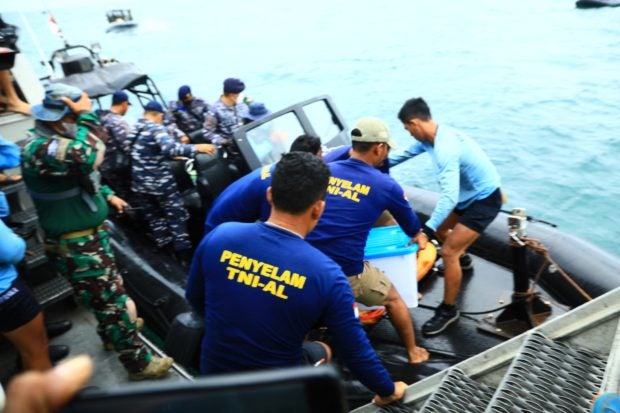 The team of navy divers who recovered the flight data recorder, get back to the ship from the crash site off the coast of Jakarta on January 12, 2021, in the search for Sriwijaya flight SJ182 which crashed after take off from Jakarta. (Photo by Azwar Ipank / AFP)

Funeral traditions in Indonesia, the world’s biggest Muslim-majority nation, call for a quick burial of the dead.

But the process of identification could take weeks or more.

Some 300 forensic examiners and other trained staff are sorting through remains, collecting blood samples as well as anything else that could help match them with passengers onboard.

Late Monday, flight attendant Okky Bisma, 29, became the first confirmed victim after investigators matched fingerprints from a retrieved hand to those in a government identity database.

“Rest in peace up there darling and wait for me… in heaven,” Bisma’s wife Aldha Refa wrote on Instagram.

“Thank you for being the perfect husband when you were on earth.”

Rapin Akbar, who gave blood at the Jakarta morgue, had five relatives on board. They included his older sister, as well as his nephew, his nephew’s wife, and their seven-month-old baby.

“Hopefully they’ll find the bodies quickly so we can bring them back…for burial,” the still-shocked Akbar said.

“(My nephew) had planned to go back to Pontianak on Sunday but changed his mind and decided to fly on Saturday instead.”

“He called me to say the flight was delayed and sent me a picture of their baby. It was (their) first.”

Amongst the other passengers on board were a pair of newlyweds, who were headed back to Pontianak for a family wedding celebration.

While relatives may want answers quickly, investigators said they would stick to getting it right.

“It’s better to be slow and correct than fast but wrong.”