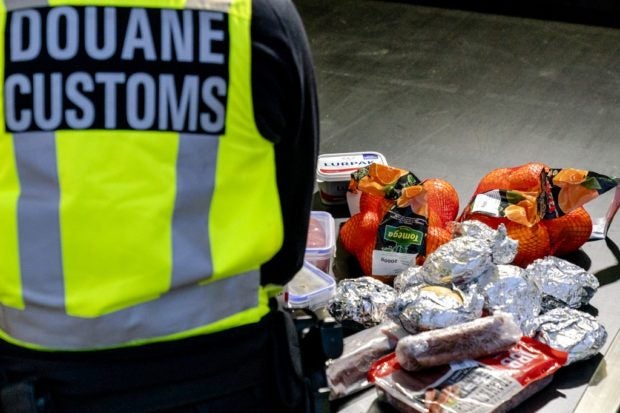 This photo taken on January 6, 2021, goods layed out as Dutch customs officer check vehicles coming off the ferry from the United Kingdom in Hoek van Holland, as new import and export rules apply following the Brexit deal. Photo by Sander Koning / ANP / AFP

THE HAGUE — Dutch customs officials have been filmed confiscating sandwiches and other food from passengers on a ferry from Britain, blaming new post-Brexit trade rules.

Officers in high-visibility jackets and face masks are seen stopping car and lorry drivers at the Hook of Holland port, in the footage filmed last week by the Avrotros public broadcaster.

“Welcome to the Brexit, sir… I’m sorry,” says one official as he seizes the foil-wrapped sandwiches of one stunned driver, who is said by the broadcaster to be Polish.

The driver plaintively asks the Dutch customs officer if he can “take off the meat and you leave me the bread?”

But the Dutch official replies: “No, everything will be confiscated.”

Another driver is seen having fish products seized.

Drivers cannot say they were not warned: the British government in December gave the example of ham and cheese sandwiches of a food that could not cross to the continent after Britain formally abandoned EU trade rules on January 1.

The new post-Brexit rules say that bringing foods that contain meat or dairy into the EU, even for personal use, is forbidden.

The rule is intended to prevent the entry of foods that could spread diseases.

The new Brexit rules have also hit grocery retailer Marks and Spencer, which wasn’t able to stock its popular sandwiches and meals in France after Britain’s official exit from the EU on January 1.