Senators insist LGUs, private sector must be allowed to buy vaccines on their own | Inquirer News
Close
menu
search

Senators insist LGUs, private sector must be allowed to buy vaccines on their own 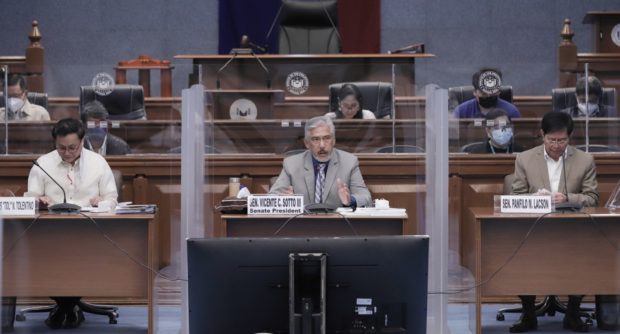 MANILA, Philippines — Some senators on Monday insisted that local government units (LGUs) and private companies should be allowed to directly deal with COVID-19 vaccine suppliers on their own and without the national government’s intervention.

During the Senate inquiry into the country’s COVID-19 vaccination plan, Senate President Pro Tempore Ralph Recto said it appears that the national government is “monopolizing” the procurement of COVID-19 vaccines.

(Why does the national government want to monopolize the purchase of vaccines? Why won’t you allow LGUs and the private sector to do their own purchases?)

“What we are saying, para mapabilis ‘yung bakuna, ‘yung pribado naman willing maglabas ng pera, bakit ‘di sila payagan na rin to import by themselves if they want,” he added.

(What we are saying is that the vaccination will be expedited if the private sector, who are willing to fund the procurement of vaccines, will be allowed to import by themselves if they want.)

National Task Force (NTF) Against COVID-19 chief and vaccine czar Secretary Carlito Galvez Jr. told senators that “no company” will directly go to the private sector or LGUs because they are not authorized to do so since “their product is only a EUA (emergency use authorization).”

“Many companies, they will not sell to [the] private [sector] considering this,” he added.

National Task Force Against COVID-19 deputy chief implementer Vince Dizon also earlier said that LGUs may procure supplies of vaccines but through tripartite agreements with the manufacturers and national government.

Interior Undersecretary Epimaco Densing III further said during the hearing that in the case of LGUs, there would be limitations in directly procuring from suppliers.

“That’s why it needs a tripartite agreement. They have limitations on the advance marketing commitment, they are not allowed to pay in advance,” Densing said.

But Senate Majority Leader Juan Miguel Zubiri cited Section 12 of the Bayanihan to Recover as One Act, which states that nothing in the said law “shall prohibit private entities from conducting research, developing, manufacturing, importing, distributing or selling COVID-19 vaccine sourced from registered pharmaceutical companies, subject to the provisions of this Act and existing laws.”

“I saw this coming, we will have a time [that the] government might insist na sila lang mag-solo act on this particular issue,” Zubiri said.

Senate Minority Leader Franklin Drilon joined his colleagues in questioning why the private sector and LGUs are not allowed to secure vaccine supplies without government mediation.

“There appears to be a stumbling block in that one cannot deal directly with the supplier – whether you are in the private sector or in the LGU. Because only the national government can deal with the manufacturer,” Drilon said.

Food and Drug Administration (FDA) director-general Eric Domingo said COVID-19 vaccines being developed are new technologies and should be subject to monitoring by the national government, hence, the need for the private sector and LGUs to coordinate with them.

“The government is setting up a monitoring system and close surveillance. So ‘yun lang po, kung susunod po sa ating patakaran ‘yung private [sector], papayagan naman po siya ng gobyerno but kailangan lang po in close coordination with the national government,” said Domingo, who is also an undersecretary of the Department of Health.

(The government is setting up a monitoring system and close surveillance, if they will follow our guidelines, we will allow them that’s why there needs to be close coordination with the national government.)

(They should follow the requirement of the government on the immunization program, the prioritization and the monitoring of those who will receive the vaccines. That is the reason why they need to coordinate with the national government.)

At this point, Drilon asked Domingo: “Mr. Undersecretary, you want to play God?”

Domingo, in response, answered in the negative and explained that “we just have to really watch closely the people we’ll be vaccinating.”

The FDA official also raised the possibility of wealthy cities procuring most of the vaccines should they be allowed to directly procure from suppliers sans coordination with the national government.

(If we just let them, those rich cities could secure all the vaccines, nothing will be left.)

Senators Cynthia Villar and Francis Pangilinan agreed with the concerns raised by Drilon.

“The issue here is the FDA is concerned about monitoring the immunization of 70 percent of the population, if that’s the case, then there has to be an arrangement so that there is a reporting recruitment on the part of the private sector and the LGU,” Pangilinan proposed.