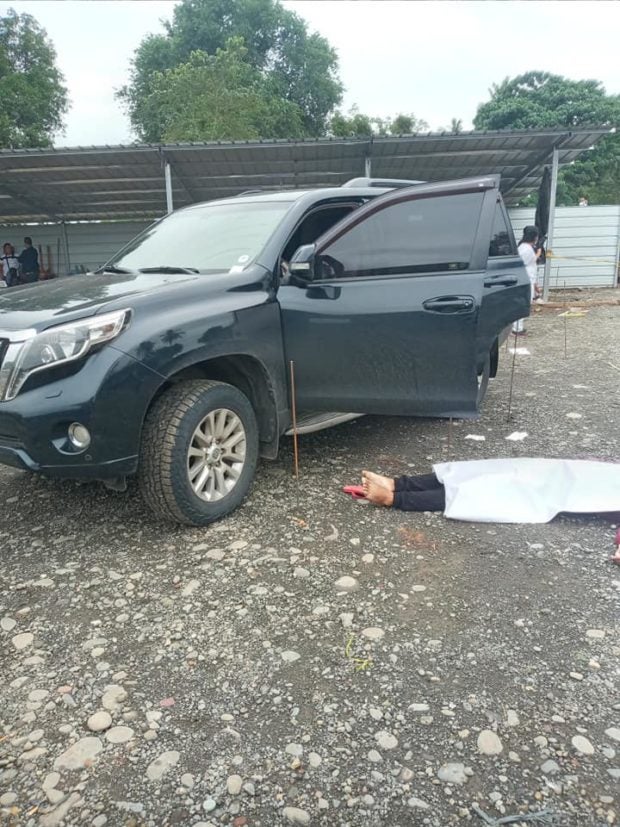 Residents and town employees took the remains of Libungan Mayor Christopher Amping Cuan, who was shot dead by still unidentified gunmen on Monday, Jan. 11, near his home. The driver, who was standing beside the mayor’s vehicle, was also shot. PHOTO from Cotabato Provincial Board Member Rolly Sacdalan

LIBUNGAN, Cotabato province –– The town mayor here and his driver was shot dead by an unidentified gunman at 11 a.m. Monday.

Libungan Mayor Christopher “Amping” Cuan was shot dead near a cockfighting arena in Barangay Cabaruyan, only a few meters from his home, according to Colonel Henry Villar, Cotabato province police director.

The mayor, who was in his cargo pants and shirt, was inspecting a cockfighting arena that was under construction when attacked by the armed men.

He and his driver died on the spot.

Cuan’s name had been on President Duterte’s list of drug suspects in 2016, but he had vehemently denied he was involved in illegal drugs and sought out the help of the then Philippine National Police (PNP) Director Gen. Ronaldo Dela Rosa in Camp Crame to clear his name.

Reports said his name was delisted but on Jan. 8, 2019, he was shot by unidentified gunmen in front of the Libungan town hall but survived.

Cuan also chaired an alliance of Cotabato towns pushing for infrastructure development among its members.

“You have served God and your people well … Rest peacefully in the loving arms of our Lord,” Cotabato Provincial Board Member Rolly Sacdalan said in a statement.

On July 10 last year, Mayor Pablo Matinong of Sto Nino, South Cotabato, was also killed by unidentified gunmen. Matinong, who was also on the President’s drug list, had repeatedly denied he was involved in the illegal drug trade.

Read Next
1 million doses of AstraZeneca COVID vaccine for Makatizens — Mayor Abby
EDITORS' PICK
Nestlé Philippines’ ‘NESCAFÉ Plan’ bags Grand Anvil at PRSP 56th Anvil Awards
Smart reinforces superiority with best speed and mobile video experience in PH
Every Filipino home can now be a smart home with realme TechLife
New 3,045 COVID-19 cases push PH total active cases to 40,074
LTO’s P500-M deal for screws draws scrutiny
How to lose a PH genius: Wesley So officially a US citizen
MOST READ
US lays out list of aid to ‘satisfy’ Duterte following VFA payment demand
How to lose a Filipino genius: Wesley So officially a US citizen
Robredo on Sara Duterte leading poll surveys: Why are Filipinos drawn to leadership of this kind?
Kris Aquino dispels rumors on son Josh getting married, thanks Ogie Diaz for defending him
Don't miss out on the latest news and information.