US House pushing Trump impeachment if he doesn’t resign – Pelosi

WASHINGTON — An increasingly isolated President Donald Trump sought on Friday to stave off a new drive to impeach him and Twitter permanently suspended his account, two days after his supporters stormed the US Capitol in an assault on American democracy.

Speaker Nancy Pelosi said on Friday that if Trump did not resign, she had instructed the House Committee on Rules to move ahead with a motion for impeachment and legislation on the US Constitution’s 25th Amendment, which provides for removal of a president who is unable to discharge his official duties.

For the 25th Amendment to be invoked, Vice President Mike Pence and the majority of Trump’s Cabinet would need to declare that Trump is unable to perform the duties of the presidency.

Democrats hope the impeachment threat will intensify pressure on Pence and the Cabinet before Trump’s term ends in less than two weeks. An adviser said Pence is opposed to the idea.

Trump exhorted thousands of supporters to march on the Capitol as Congress met to certify his defeat to Democrat Joe Biden in the 2020 presidential election, prompting chaos in which crowds breached the building, forced the evacuation of both chambers and left a police officer and four others dead in their wake. 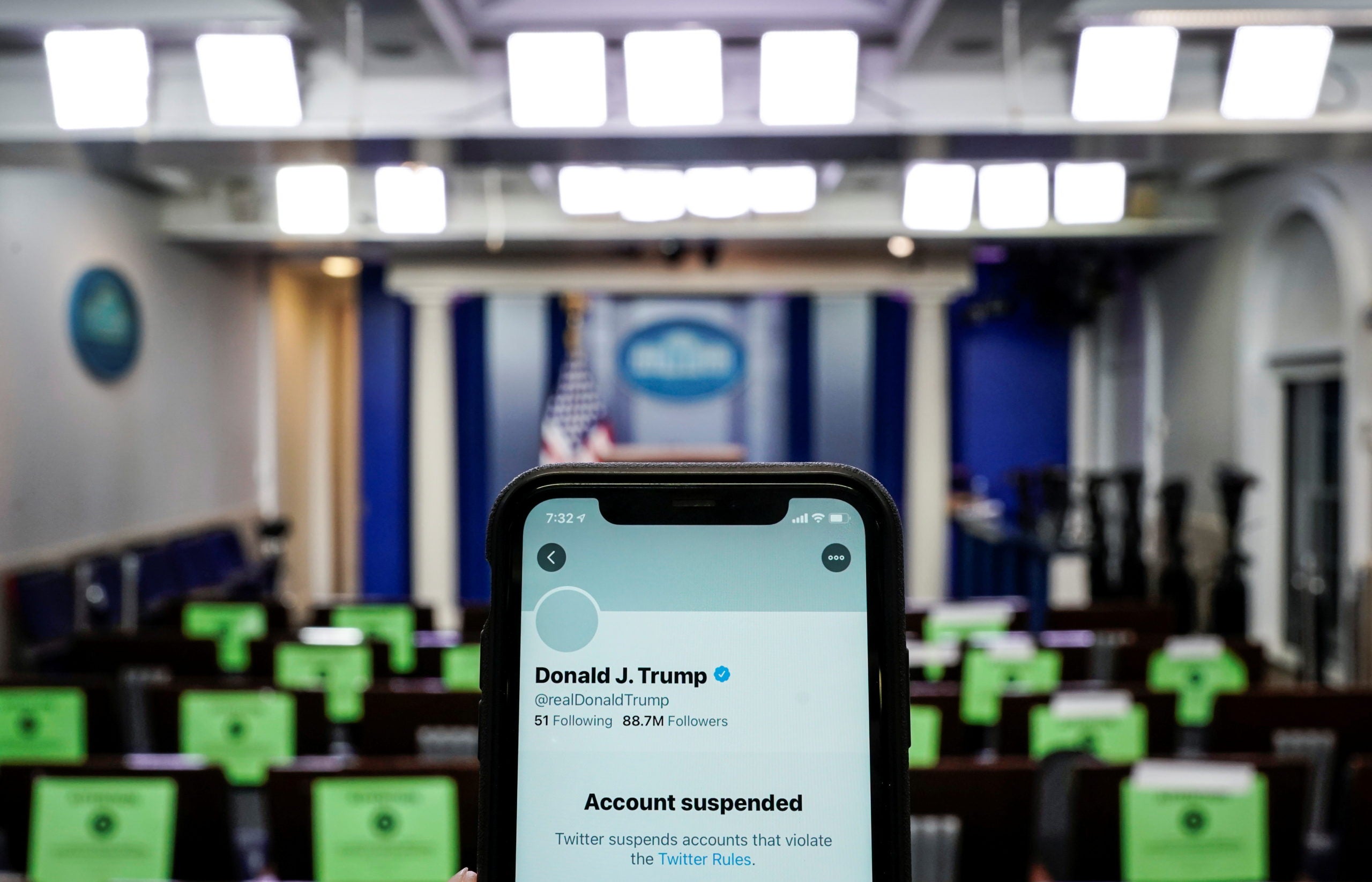 SAY NO MORE Twitter decided to suspend permanently the account of outgoing US President Donald Trump on Jan. 8 “due to the risk of further incitement of violence.” Trump’s supporters stormed the US Capitol on Wednesday as Congress met to certify his defeat to Joe Biden in the 2020 presidential election.—REUTERS

A Reuters/Ipsos poll conducted Thursday and Friday found 57 percent of Americans want Trump to be removed immediately from office following the violence.

Nearly 70 percent also disapproved of Trump’s actions in the run-up to the Capitol rampage.

It is unclear whether lawmakers would be able to remove Trump from office, as any impeachment would prompt a trial in the Senate, where his fellow Republicans still hold power and two-thirds of the 100 members must vote to convict for his removal.

He noted the Senate will hold its next work session on Jan. 19 and needs the consent of all 100 senators to convene sooner—meaning a trial would not begin until Trump was out of office, a source familiar with the document said.

Articles of impeachment, which are formal charges of misconduct, have been crafted by Democratic Representatives David Cicilline, Ted Lieu and Jamie Raskin.

A copy circulating among members of Congress charges Trump with “inciting violence against the government of the United States” in a bid to overturn his loss to Biden.

Twitter, which has been Trump’s favorite way to communicate with his supporters and a way to share his false claims of election fraud with his nearly 90 million followers, had been under increasing pressure to take action after Wednesday’s mayhem in Washington.

“After close review of recent Tweets from the @realDonaldTrump account and the context around them we have permanently suspended the account due to the risk of further incitement of violence,” Twitter said.

Plans for future armed protests were proliferating on and off Twitter, the company added, including a proposed secondary attack on the Capitol on Jan. 17.

Trump used the official @POTUS government account later on Friday to tweet “We will not be SILENCED!” and “Twitter is not about FREE SPEECH.” Trump said he was considering building his own social media platform.

Trump’s regular use of Twitter was a key part of his campaign to win the presidency in 2016. Since then he has used it to fire up his political base with attacks on Democrats and any Republicans who have opposed him.

He has said he would not attend Biden’s inauguration, departing from a time-honored tradition that typically sees the outgoing president escort his successor to the ceremony.

The House impeached Trump in December 2019 for pressuring the Ukrainian president to investigate Biden, but the Senate acquitted him in February 2020.