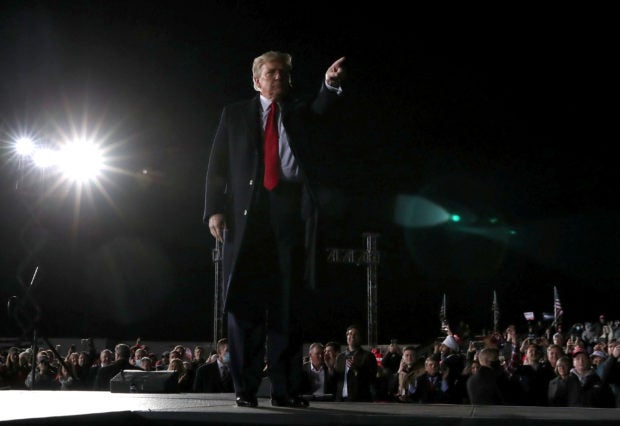 U.S. President Donald Trump addresses a campaign rally in Dalton, Georgia, U.S., on the eve of the run-off election to decide both of Georgia’s Senate seats January 4, 2021. REUTERS/Leah Millis/File Photo

WASHINGTON  – President Donald Trump’s decision to call for calm in a video came at the urging of senior aides, some arguing he could face removal from office or legal liability over his supporters’ storming of the U.S. Capitol, two sources familiar with the matter said on Friday.

In his video released on Thursday night, Trump came closer than ever to conceding his loss in November’s election to President-elect Joe Biden after a two-month fight seeking to overturn the outcome with baseless claims of voter fraud.

Trump’s angry speech to thousands of supporters the day before prompted a mass demonstration on Capitol Hill that led to an assault on Congress in which five people died, including a Capitol Hill police officer who succumbed to injuries.

Senior advisers Ivanka Trump and Jared Kushner, along with speechwriter Stephen Miller, counsel Pat Cipollone, chief of staff Mark Meadows and press secretary Kayleigh McEnany all pressed Trump to clearly state that he did not support the violence, the sources said.

National security adviser Robert O’Brien was also among the senior aides who communicated to Trump the need to strongly condemn the Capital Hill violence before the president issued the video on Thursday, a source familiar with matter said.

It was unclear whether O’Brien spoke directly to Trump or made his point through an intermediary, the source said.

O’Brien had considered resigning after Wednesday’s storming of the Capitol but was dissuaded by calls from former national security officials who urged him to stay to help maintain stability in the administration’s final days.

One source said Trump’s advisers exhorted him to denounce the violence in the video, noting that there was a move afoot to impeach him and talk among some Cabinet members about removing him from office under the U.S. Constitution’s 25th Amendment. He could also face legal liability, the source said.

Another source said White House officials felt it was important for Trump to speak out clearly against violence and call for healing after his initial tepid comments on the day of the Capitol Hill attack.

The video remarks were viewed in the White House as the concession speech that many aides had been hoping he would deliver after his loss became apparent, the source said.

Democrats in the House of Representatives plan to introduce articles of impeachment against Trump on Monday, two sources familiar with the matter said.

U.S. House of Representatives Speaker Nancy Pelosi, a Democrat who has long been at odds with the Republican Trump, spoke to the top U.S. general about preventing an “unhinged” Trump from accessing nuclear launch codes in the final days of his term.

Vice President Mike Pence arrived at the White House on Friday. Whether Pence would meet Trump was unclear as the two men remain at odds.

Pence has been loyal to Trump throughout the president’s four years in office, but sources said Trump berated him to his face earlier this week for refusing to try to block the certification of Biden’s win in Congress.

Seema Verma, a longtime Pence friend who is administrator of the Centers for Medicare & Medicaid Services, was described by a source familiar with her thinking as “repulsed at how the vice president has been treated both inside and outside of the administration. She believes attacks on him also further erodes faith in our democracy.”

A senior administration official said Pence opposes using the 25th Amendment to oust Trump with less than two weeks left of his presidency.

Concerns about ensuring continuity of government and a transition to Biden have prompted some White House aides and top administration officials to remain in place after mulling resignations.

One of those was Verma, who held an all-staff Zoom call in which she said she was heartbroken and appalled at the rioting but committed to “seeing our team through an orderly transition of power to the Biden administration over the next two weeks,” a source on the call said.

Verma’s spokesman had no comment when asked about Verma’s remarks.

Cipollone seemed also prepared to stay after lawmakers urged him to remain in place, a source said.

But a growing number were heading for the exits, including several top officials from the National Security Council and two Cabinet secretaries.

What Trump will do with his remaining time in office was unclear. An aide said he may make a trip to inspect his signature wall project along the U.S. southern border with Mexico next week.

Trump’s tweet on Friday that he will not attend Biden’s inauguration on Jan. 20 left open when he would actually depart the White House. One source said he planned to move to his Mar-a-Lago club in Palm Beach, Florida, and may depart on Jan. 19.