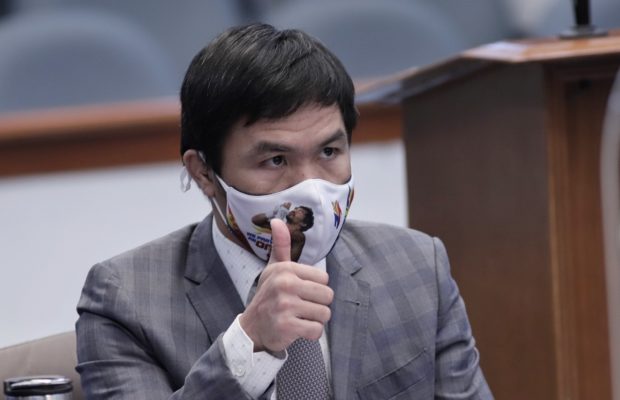 MANILA, Philippines — The P500,000 bounty for the location of those implicated in the death of flight attendant Christine Dacera will remain in place despite calls for its recall, Senator Manny Pacquiao said Friday.

Pacquiao made the announcement after Atty. Mike Santiago, legal counsel of four individuals named respondents in the case, appealed to the senator as well as ACT-CIS Rep. Eric Yap to recall the reward money for the capture of the supposed suspects as it was affecting the safety and security of his clients.

(In line with this, the P500,000 bounty for the location of those implicated in the case remains.)

“Let it be clear however, that this bounty was put up only to ensure that all the people who were present on the night leading to the discovery of Christine’s lifeless body would come forward and shed light about this incident,” the senator added.

Should the persons of interest voluntarily surrender and submit themselves to investigating authorities, Pacquiao said the bounty will be converted as financial aid to be given to Dacera’s family.

(If you really care about Christine and her mourning family and loved ones, I appeal that you give importance to your friendship with her and tell the story behind the case.)

Pacquiao said three of those implicated in the case who have surrendered and given their side of the story “were not only able to help investigators piece together the events that transpired  but they have also shown that they have nothing to hide.”

(Tell what really transpired in order to lessen several speculations on this case .)

“Wala pong dahilan upang kayo ay matakot kung kakampi ninyo ang katotohanan [There is no reason to be afraid if you are on the side of truth],” he added.

Following Santiago’s appeal, Yap said the P100,000 reward he offered for information on the capture of those implicated in the death of Dacera is now “moot” and “off the table.

The Makati City Prosecutor’s Office earlier returned to the police the provisional charges of rape with homicide against 11 men for further investigation.