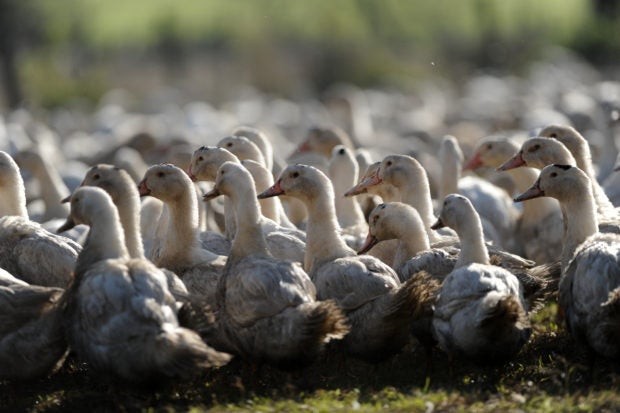 In this file photo taken on December 10, 2015 ducks roam in an outdoor enclosure in a farm in Benesse-Maremne, southwestern France. – A “statement of powerlessness” in the face of a situation that has become “out of control”: faced with an outbreak of the number of farms contaminated by bird flu in the south-west, foie gras professionals on January7, 2021 urged the health authorities to carry out preventive culling of ducks on a larger scale. (Photo by IROZ GAIZKA / AFP)

PARIS, France – French producers of foie gras called Thursday for a mass preventive cull of ducks to try to halt the spread of a severe strain of bird flu that is ripping through poultry farms in the southwest of the country.

The highly pathogenic H5N8 virus was first detected in a bird in a pet shop on the Mediterranean island of Corsica in November before spreading to duck farms on the mainland in December.

Several European countries have reported cases of infection, five years after a major outbreak prompted the slaughter of millions of ducks in France.

“The virus is stronger than us. New clusters are constantly emerging,” the head of France’s CIFOQ federation of foie gras producers, Marie-Pierre Pe, told AFP.

The number of outbreaks had now risen to 124, the Ministry of Agriculture said on Thursday, adding that around 350,000 ducks had been slaughtered since December 24.

Earlier this week the government’s chief veterinary officer, Loic Evain, said over 200,000 ducks had already been slaughtered and that a further 400,000 birds were set to be culled, out of around 35 million reared each year.

He described the virus, which is not harmful to humans, as “very, very contagious”.

Officials in Belgium said Thursday they had culled three contaminated poultry flocks — one in Menin, in the west of the country, another in Dinant in the south and a third in Dixmude in western Flanders.

Belgium’s federal food safety agency AFSCA, which has ordered poultry owners to lock up their animals to avoid contamination, said that 20 cases of the virus had been found in wild birds.

Herve Dupouy, a French producer who heads the local poultry section of the FNSEA farmers federation in the Landes department, a bastion of the foie gras industry, said “the situation is out of control.”

He called on the state to cull all poultry flocks in the area and impose a two-month production freeze.

“There’s no other solution,” he said.

So far the authorities have been culling all ducks and geese within a three-kilometre radius of an infected flock. Free-range chickens and turkeys within that range have also been slaughtered.

CIFOQ said Thursday that government officials had shared plans to expand the culls over a wider area.

The bird flu clusters have been detected on poultry farms and in pet shops in the Landes department and the neighbouring Gers and Pyrenees-Atlantique departments.

The head of France’s chamber of agriculture, Sebastien Windsor, called Wednesday for “radical measures” to try to restore confidence in export markets such as China which announced this week it was suspending French poultry imports over the virus.

Producers of foie gras, a pate made from the livers of force-fed ducks or geese, fear a repeat of the devastation wrought by two previous waves of bird flu in the winters of 2015/2016 and 2016/2017.

Over 25 million ducks were culled in the first outbreak, followed by 4.5 million the following year, causing a steep decline in foie gras production.

Besides France and Belgium, the Netherlands, Sweden, Britain and Ireland have also reported bird flu outbreaks since the winter began.

Dutch authorities culled some 190,000 chickens in November over the discovery of the virus at two farms.

Read Next
Poorest countries can expect vaccines within weeks: WHO
EDITORS' PICK
Fairways & Bluewater Resort Boracay shines in the International Arena
Through the lens of BJ Pascual: From famed celebrities to young business magnates
2020 Filipinos of the Year: Health-care front-liners
Experience clearer calls nationwide with Smart VoLTE
Essential workers: The many faces of pandemic heroism
Finding ‘3rd generation’ crucial in contact tracing, says Magalong
MOST READ
For P500, you can book this QC garden for private dining
Lacson twits Garbin ‍on Cha-cha claims
PH named 2nd most ‘Instagrammable’ place in the world
US capitals on edge for armed protests as Trump presidency nears end
Don't miss out on the latest news and information.