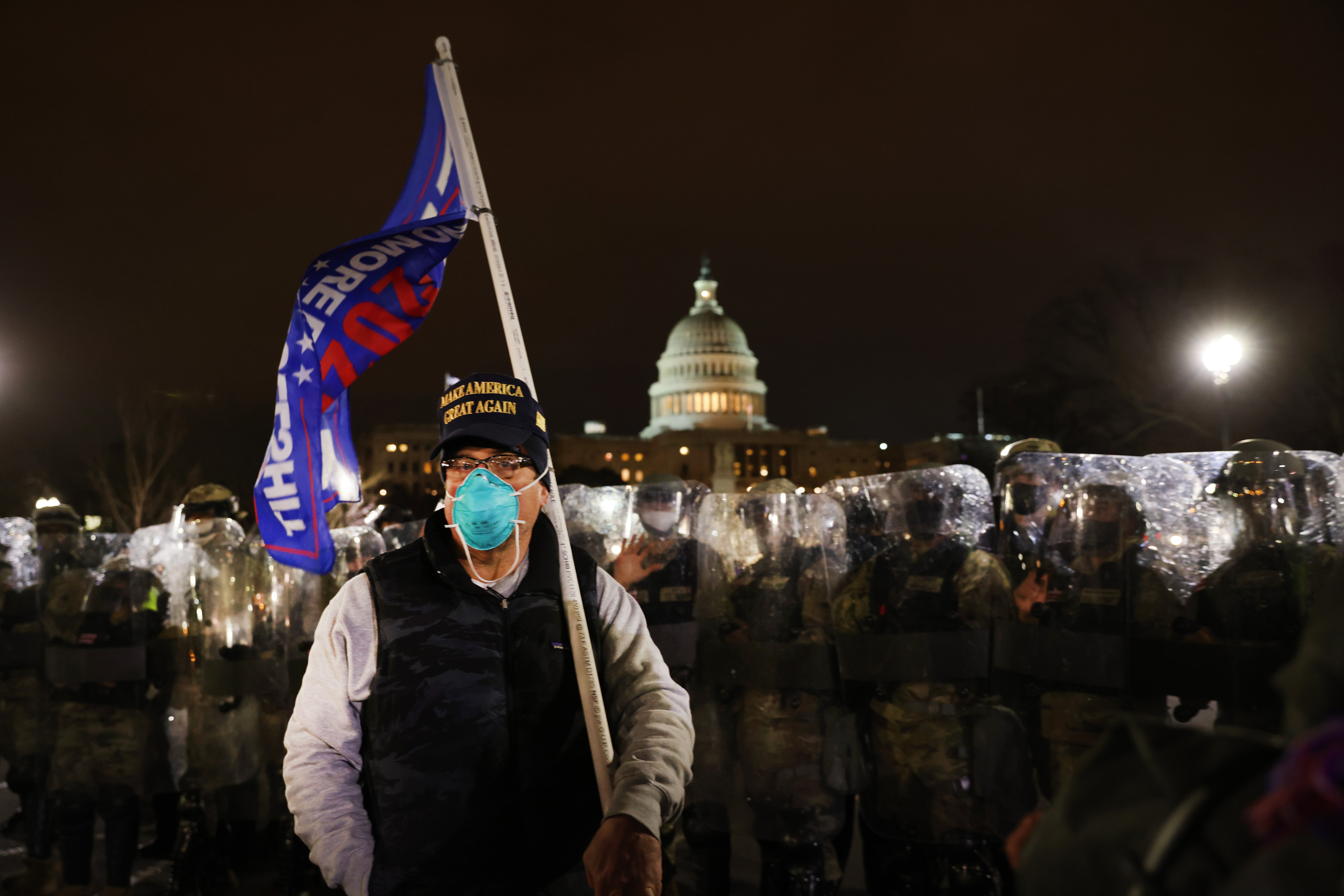 WASHINGTON, DC – JANUARY 06: Members of the National Guard and the Washington D.C. police keep a small group of demonstrators away from the U.S. Capitol on January 06, 2021, in Washington, DC. A pro-Trump mob stormed the Capitol earlier, breaking windows and clashing with police officers. Trump supporters gathered in the nation’s capital to protest the ratification of President-elect Joe Biden’s Electoral College victory over President Donald Trump in the 2020 election. Spencer Platt/Getty Images/AFP

SAN FRANCISCO — Twitter blocked Donald Trump on Wednesday and threatened a permanent ban for breaking platform rules as social media scrambled to respond to violence in the US capital blamed on the outgoing president’s repeated claims of election fraud.

In a rapidly evolving sequence of events, Facebook and YouTube took down videos posted by Trump, and Twitter followed suit as the platforms claimed he was inciting violent protests by his supporters, who stormed the US Capitol building.

Twitter said Trump’s messages were violations of the platform’s rules on civic integrity and that any future violations “will result in permanent suspension of the @realDonaldTrump account,” his social media handle followed by some 88 million people.

The messaging platform said Trump’s account would be locked for 12 hours and that if the offending tweets are not removed, “the account will remain locked.”

The response from social media came amid accusations the president was attempting a coup, with protesters storming the Capitol building seeking to derail the certification of Joe Biden’s election victory.

“This is an emergency situation and we are taking appropriate emergency measures, including removing President Trump’s video,” Facebook vice president of integrity Guy Rosen said in a tweet.

“We removed it because on balance we believe it contributes to rather than diminishes the risk of ongoing violence.”

YouTube also removed a Trump video that repeated his baseless attacks on the integrity of the election he lost in November, following its policy barring claims challenging election results.

“As the situation at the United States Capitol Building unfolds, our teams are working to quickly remove livestreams and other content that violates our policies, including those against incitement to violence or regarding footage of graphic violence,” said YouTube spokesperson Alex Joseph.

Facebook subsequently said it would search for and remove content that praised the storming of the Capitol or encouraged the violence.

The massive social network said it would also seek to take down additional calls for protests, including peaceful ones if they violate a curfew imposed by the city of Washington, or any attempts to “restage” the storming of Congress.

“The violent protests in the Capitol today are a disgrace,” a Facebook spokesperson said.

“We prohibit incitement and calls for violence on our platform. We are actively reviewing and removing any content that breaks these rules.”

Facebook maintained that it was in contact with law enforcement officials and continued to enforce bans on QAnon conspiracy group, militarized social movements, and hate groups.

Twitter’s first actions earlier in the day were aimed at limiting the reach of offending tweets from Trump and others.

“We have been significantly restricting engagement with tweets labeled under our Civic Integrity Policy due to the risk of violence,” the Twitter support team said.

“This means these labeled tweets will not be able to be replied to, retweeted, or liked.”

A Trump video clip posted atop his official Twitter account was tagged with a note saying the claim of voter fraud was disputed, and that the tweet could not be replied to, retweeted, or liked “due to a risk of violence.”

Rival social network Parler, which has been praised by Trump supporters, showed posts lauding the mob assault on the Capitol.

“Hope to see some of the DemonRat residences getting torched,” one user wrote.