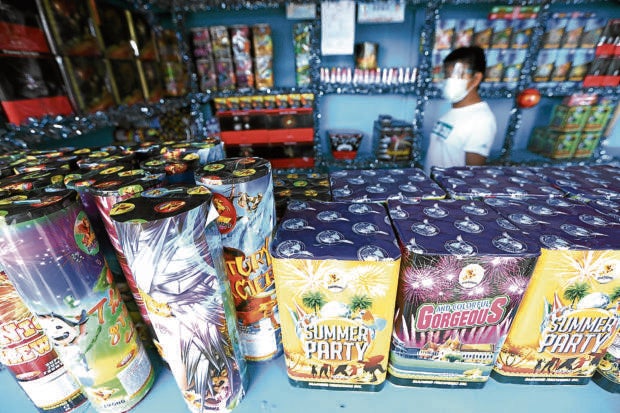 FIREWORKSCAPITAL The manufacture and sale of firecrackers and pyrotechnic products have provided livelihood to small businessmen and provided employment to residents of Bocaue town in Bulacan province, the so-called fireworks capital of the country. —NIÑO JESUS ORBETA

MANILA, Philippines — President Rodrigo Duterte will give the go-signal to local firecracker manufacturers to continue their trade if they sell their products exclusively to local governments that host and supervise community fireworks shows.

“I’ll only allow firecrackers and everything to be done by [the local] government. And it would be the mayor himself and the chief of police who should do this,” he said in a televised address on Monday night.

“No more … selling to the private individuals. It would only be the government who would conduct the [fireworks shows]. That is my [compromise offer], so that you don’t lose your livelihood [and] you don’t lose the business,” he added.

Duterte proposed the compromise to the makers of firecrackers and other pyrotechnic materials, weeks after he announced a plan to impose a total ban on firecracker use to ensure public safety, especially during the Christmas and New Year holidays.

He said fireworks displays in communities should be viewed by the people at safe distances.

“It behooves on the mayor to see to it that everything or everybody and everything is in place and everybody is safe. Only then I will allow it, only the government [can do it],” he said.

President Duterte said firecracker manufacturers could only sell to local governments and would no longer be allowed to offer their products to “private individuals.”

“So those from Bocaue, it’s this way: for New Year, just sell them to the LGUs (local government units). There’s plenty of them and you will earn a profit because everyone will buy from you,” he said.

Duterte said it would still be up to the mayors to decide whether to host fireworks shows or displays in their areas. “I will not compel [LGUs] that don’t want fireworks, just like Davao City. But for those really who cannot help it, either because they want to make their constituents happy [or] the mayor [himself] is predisposed to [a] nois[y] and a boisterous New Year welcome, this is what you will do,” he said.

President Duterte proposed that manufacturers, such as those in Bocaue, Bulacan, the acknowledged firecracker capital of the country, would contact local governments to offer their products. Police, on the other hand, would regulate the distribution and transportation of firecrackers to local governments.

Duterte said he wanted Filipinos to safely enjoy New Year celebrations and at the same time keep the livelihood of those engaged in fireworks and firecracker manufacturing business. Earlier, officials and firecracker manufacturers from Bulacan called on the President to defer the implementation of the total ban on firecracker use, saying producers still needed to recoup their losses from poor sales as a result of the coronavirus pandemic.

During this year’s holiday celebrations, Metro Manila mayors banned the sale and use of firecrackers as part of health protocols to reduce the spread of COVID-19 during the festivities. They said they also wanted to prevent firecracker-related injuries and even deaths during the New Year revelries. The Department of Health reported an 85-percent decrease in firework-related injuries last year. No firecracker-related deaths were reported.