SWS: 42% of Filipinos optimistic PH economy will improve in 12 months 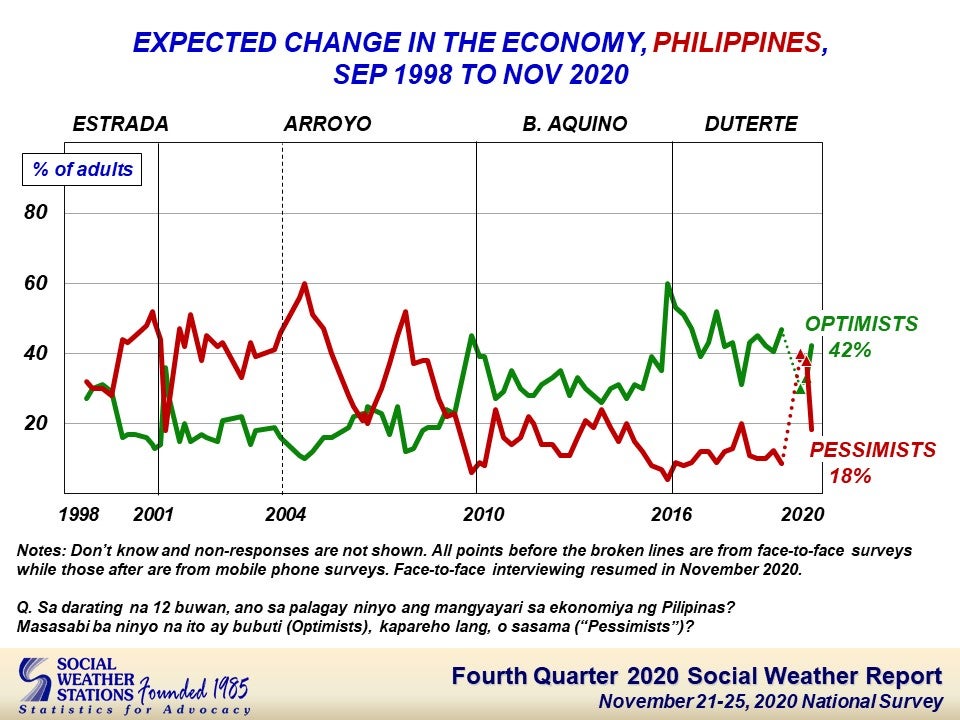 MANILA, Philippines — Forty-two percent of Filipinos are optimistic that the state of the Philippine economy will improve in the next 12 months, the latest Social Weather Stations (SWS) survey showed Tuesday.

Aside from those what the SWS called as “economic optimists,” the survey also revealed that 28 percent of adult Filipinos expect that the state of the economy will remain the same, while 18 percent belong to the “economic pessimists” — or those who believe that the economy will worsen in the next 12 months.

The latest SWS survey had sampling error margins of of ±2.5 percent for national percentages, ±4 percent for Balance Luzon, and ±6 percent for Metro Manila, the Visayas, and Mindanao, the pollster said.

“The survey item reported here was non-commissioned. It was done on SWS’s own initiative and released as a public service,” SWS added.

For the survey, respondents were asked about economic optimism or pessimism. The exact question was:

(Over the next 12 months, what do you think will happen to the economy of the Philippines? Would you say it WILL BE BETTER, SAME, or WILL BE WORSE?)

Read Next
House bloc seeks probe into PSG vaccination despite Duterte warning
EDITORS' PICK
Nestlé Philippines’ ‘NESCAFÉ Plan’ bags Grand Anvil at PRSP 56th Anvil Awards
Smart reinforces superiority with best speed and mobile video experience in PH
Every Filipino home can now be a smart home with realme TechLife
New 3,045 COVID-19 cases push PH total active cases to 40,074
LTO’s P500-M deal for screws draws scrutiny
How to lose a PH genius: Wesley So officially a US citizen
MOST READ
US lays out list of aid to ‘satisfy’ Duterte following VFA payment demand
How to lose a Filipino genius: Wesley So officially a US citizen
Robredo on Sara Duterte leading poll surveys: Why are Filipinos drawn to leadership of this kind?
So: I lacked connections to succeed in PH ‘culture’
Don't miss out on the latest news and information.