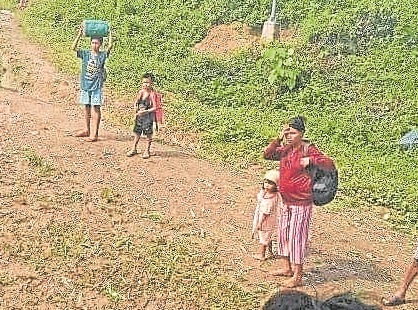 TREKTOSAFETY Residents of Barangay Lahug in Tapaz town flee with their children and belongings. —CONTRIBUTED PHOTO

The Makabayan bloc wants to investigate the killing of nine leaders of an indigenous peoples’ community in police and military operations in Iloilo and Capiz late last year.

The progressive lawmakers have filed House Resolution No. 1449 urging the House of Representatives to investigate the Tumandok massacre and the arrest of 18 other Tumandoks.

“This mass killings and arrests of indigenous peoples in Panay, in the middle of a pandemic no less, is highly condemnable, and has no place in society. The brazen killing of the poor and marginalized indigenous peoples is an indicator of the state of human rights in the country as well as the raging impunity that seems to reign over our land,” the measure read.

On Dec. 30, nine leaders of the Tumandok tribe were killed in synchronized police and military operations in Panay while 18 other tribe members were arrested.

Law enforcers served search warrants for illegal possession of firearms and explosives during the synchronized operations in Calinog, Iloilo, and Tapaz, Capiz.

The relatives of the arrested Tumandoks claimed that the suspects were tortured and that the law enforcers planted the firearms allegedly recovered inside their homes.

They also maintained that the slain and arrested Tumandoks were unarmed and were noncombatants, contrary to the claims of the authorities that the suspects opened fire.

The Makabayan bloc said the nine Tumandok leaders were “well-known indigenous leaders in their respective barangays” who were active in opposing militarization, land grabbing and the construction of the Jalaur Mega Dam in Calinog, Iloilo.

“For these reasons, they were Red-tagged by the military, prior to the series of arrests and killings,” the progressive lawmakers said.

Lahug village chief Jobelyn Catamin earlier said the residents were afraid to stay in their homes for fear of more police operations.

Capiz Gov. Esteban Evan Contreras said he also received information that more than 70 villagers of Acuña had been sleeping in a school.

“Our main concern is providing food and other assistance,” he said.

The governor said he welcomed moves to investigate the coordinated police operations in seven villages in Tapaz and two villages in neighboring Calinog town in Iloilo. INQ