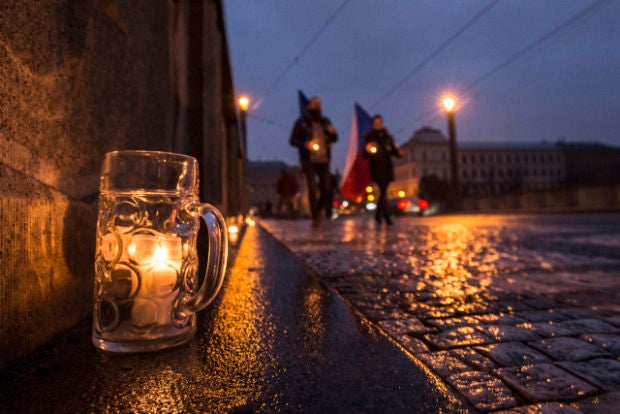 The kilometer-long chain led from the government building to the historic Old Town Square, with glasses placed two or three meters apart.

“We are here because we are really desperate and at the end of our tether, physically and mentally,” protest organizer Jiri Janecek told AFP.

The manager of the Maly Janek small brewery south of Prague complained that the government has hurt the sector with its three restaurant closures since the COVID-19 outbreak last March.

“The government misfired with its restrictions and kicked off a far more lethal pandemic of poverty, unemployment, collapsing companies,” said Janecek, bemoaning paltry compensations for the business.

On the chilly, foggy Sunday afternoon, protesters lit candles and placed them in beer glasses handed out by the organizers, which they then put on the pavement.

Some carried Czech flags and the organizers put up a coffin with nails as a symbol of the looming death of their business.

“I don’t like the bans, the restrictions affecting our personal freedom, you cannot go anywhere, nothing’s going on. I don’t like this kind of life,” protester Veronika Musilova told AFP.

Facing yet another spike in COVID-19 cases, the Czech government closed restaurants, pubs and bars before Christmas, reducing their sales to takeaway windows.

Restaurants in the country boasting the world’s highest beer consumption per capita were already closed during the first wave of the epidemic in the spring and for most of this autumn.

An EU member of 10.7 million people, the Czech Republic has registered over 740,000 confirmed COVID-19 cases including almost 12,000 deaths since the March outbreak.

The country saw a massive spike in COVID-19 infections in October and has struggled to bring infection rates under control since then. CC