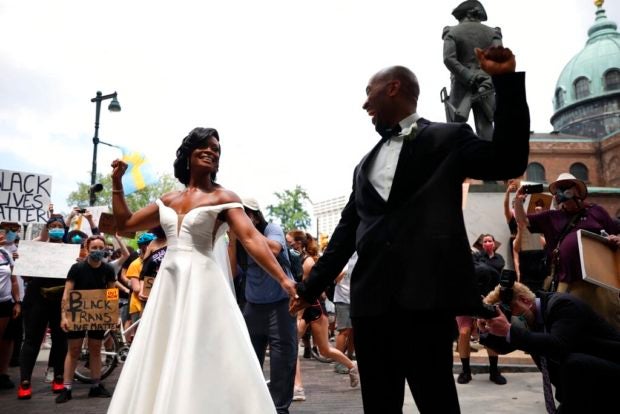 Kerry Anne and Michael Gordon came out to the crowd during a protest, Saturday, June 6, 2020, in Philadelphia over the death of George Floyd, a black man who was in police custody in Minneapolis. Floyd died after being restrained by Minneapolis police officers on May 25. Image: Tyger Williams/The Philadelphia Inquirer via AP

A newlywed couple in Pennsylvania, USA, had a larger celebration than they expected on their big day.

After their wedding ceremony in a hotel, couple Kerry Anne and Michael Gordon stepped into a crowd of protestors in Philadelphia, Philadelphia Inquirer reported on Saturday, June 6. The couple was welcomed with cheers as they joined the thousands who had gathered on the streets. 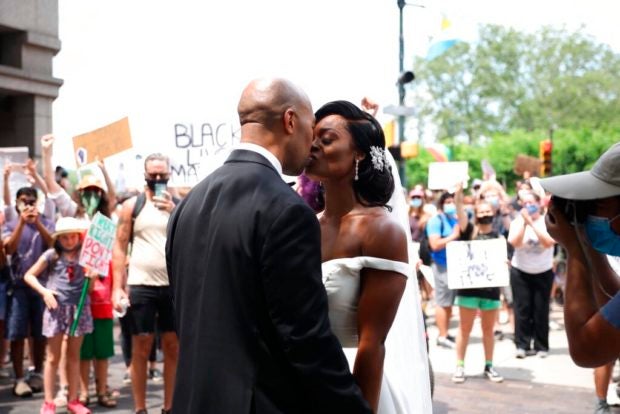 Kerry Anne and Michael Gordon share a kiss amid a crowd of protestors. Image: Tyger Williams/The Philadelphia Inquirer via AP

They had set the date prior to the protest, but chose not to move it despite learning that there would be a rally, as per ABC News on Sunday, June 7.

“Not only are we feeling the movement of the people… but I’m meeting my husband, on our wedding day, as a strong black man and a good representative of who we are as people, what our men are like, what our culture is like,” Kerry Anne told ABC News. “It was just a very, very empowering moment for us considering all of this is happening at one moment in one time.”

“We all see this injustice. We all want to see this needle shift away from the status quo and… that made this day more memorable in ways,” Michael said. He also said it was a peaceful protest.

Demonstrations against police brutality have been going on in the city for days following the death of George Floyd, a black man who died while in police custody last May. Niña V. Guno /ra

Man fears being out alone after death of George Floyd; neighbors join him in walking outside