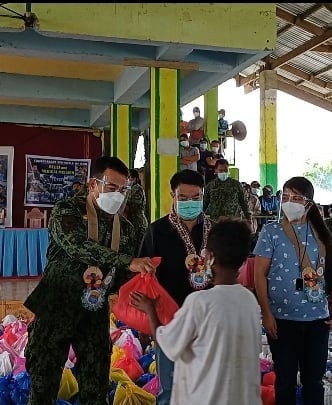 The Cagayan Valley police, together with local and overseas donors, distribute gift and food packs to members of the Aeta community and poor families in Lasam over the weekend. (Photo courtesy of PNP-Region 2)

TUGUEGARAO CITY – At least 850 members of Aeta communities and poor families in Lasam have received food and gift packs from Cagayan Valley police force on Saturday.

Police Brig. Gen. Crizaldo Nieves, Cagayan Valley regional director, and his wife Imelda, along with some members of the Cagayan provincial police, distributed 400 food packs, 350 gift packs and assorted clothing to the Aetas and indigent families through the “Lingkod Bayanihan sa Barangay” project in Barangays Peru and Sicalao in Lasam.

Nieves vowed to extend more assistance to the less fortunate families, especially in the remotest areas of the region during the pandemic.

“This endeavor is proof that the government, through its various agencies is continuously devising ways to serve the people in the best way it can,” Nieves said.

“I would also like to express my gratitude to the numerous donors who have been our partners since the start of this project as well as in the relief operations to the flood-stricken areas in the aftermath of typhoon Ulysses,” he added.

The regional director also turned over five Galil rifles to the Lasam police as part of the police’s capability enhancement program.