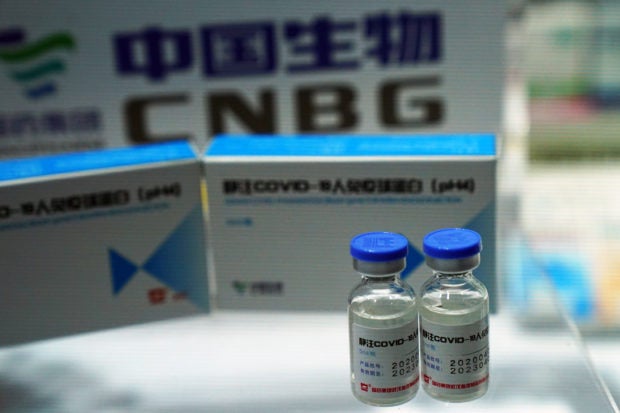 MANILA, Philippines — The Department of Science and Technology (DOST) bared that China-based Sinopharm wanted the Philippines to either fund its COVID-19 vaccine clinical trials in the country or recognize China’s approval or authorization of the vaccine.

“Sinopharm reached out to DOST with two proposals for collaboration: (1) the conduct of their clinical trial to be funded by the Philippines, or (2) the Philippines will recognize the approval/authorization from their country,” the DOST said in a joint statement with the Department of Health (DOH) and Food and Drug Administration (FDA) on Friday.

The DOST added that it responded to Sinopharm’s letter, saying that it can only fund the trials under the World Health Organization’s solidarity trial.

Sinopharm never responded to the letter, the DOST said.

This was in response to the revelation of two representatives of MKG Universal Drug Trading Corporation, claiming to be the “sole and exclusive” Philippine distributor of the Sinopharm-developed vaccine.

The representatives had claimed that Sinopharm sent a letter to Health Secretary Francisco Duque III last May 2020.  That letter stated that  Sinopharm was inviting the Philippines in collaboration for the clinical trial.

Duque, however, never responded to the letter, the MKG representative claimed.

Duque, in a radio interview, responded to the representative’s claims, saying that he had no knowledge that Sinopharm sent his office a letter for the conduct of clinical trials.

The DOH, meanwhile, said that it “categorically denies” the accusations of the representatives.

“The DOH categorically denies these baseless accusations and clarifies that the country’s participation in several clinical trials including that of Sinopharm’s was approved by the Inter-Agency Task Force on Emerging Infectious Diseases (IATF-EID) as early as May, as resolved in the IATF-EID Resolution No. 39 dated 22 May 2020,” the DOH said.

The FDA also reported that based on its records, Sinopharm has not submitted an application for clinical trials nor Emergency Use Authorization.

In October, the DOST said that Sinopharm “changed its mind” and decided not to conduct clinical trials in the Philippines.

Sinopharm’s vaccine was reported to have a 79 percent efficacy rate.

China recently approved the vaccine for general public use.