Immigrants in US both hopeful and wary of Biden 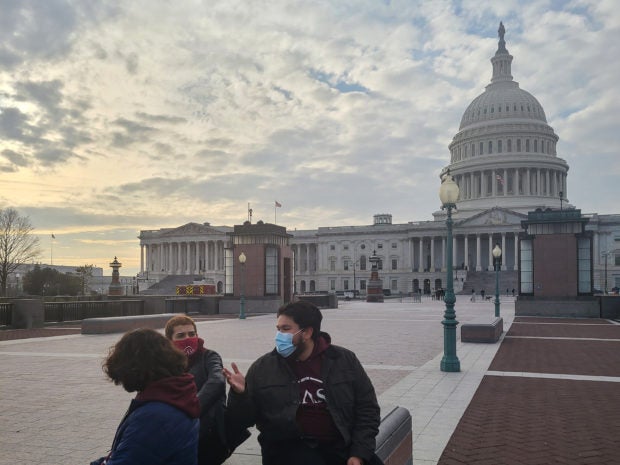 Gabriela Hernandez, 22, (C) talks with friends in front of the US Capitol in Washington, DC, on December 21, 2020. – Immigrants in the US await Joe Biden’s presidency with a mix of hope and wariness — he spells relief after four years of tough restrictions under Donald Trump, but he served as vice president under Barack Obama, whom many referred to as “the deporter in chief.” Gabriela Hernandez, a 22-year-old who came to the US from El Salvador at age five with her mother, says she is “not too big of a fan” of the next president — but she is “pretty optimistic that this administration is going to try to work with us.” (Photo by Ariela NAVARRO / AFP)

WASHINGTON – Immigrants in the US await Joe Biden’s presidency with a mix of hope and wariness — he spells relief after four years of tough restrictions under Donald Trump, but he served as vice president under Barack Obama, whom many referred to as “the deporter in chief.”

On the surface, Biden is making the right noises.

Gabriela Hernandez, a 22-year-old who came to the US from El Salvador at age five with her mother, says she is “not too big of a fan” of the next president — but she is “pretty optimistic that this administration is going to try to work with us.”

For a start, Biden has promised a path to citizenship for the roughly 11 million people living in the US without authorization.

He also supports immigrant protection programs that Trump tried to kill off, such as Deferred Action for Childhood Arrivals (DACA), which gave people brought to the US without papers as children protection from deportation and permission to work.

Instituted by Obama in 2012, DACA covers some 700,000 people known as Dreamers. For many, America is the only country they have ever known.

Trump in 2017 tried to dismantle the program on grounds that it is unconstitutional, triggering a lengthy court battle. DACA survived — but the Department of Homeland Security reinstated it only partially.

Biden has vowed to restore the program when he takes office in January, though he needs the support of Congress to do so — and with control of the Senate up for grabs due to January 5 run-off elections in Georgia, that support is in question.

Even if he succeeds, DACA itself is only a “band-aid,” said Hernandez, a beneficiary of the program.

“DACA kind of puts this little umbrella over a little population of millions,” she said.

And DACA is just the beginning.

Biden faces a daunting task in rolling back Trump-era measures against immigration — reforms that “occurred at an unprecedented, even frenetic, pace,” according to the Migration Policy Institute.

Through more than 400 executive actions the Trump administration “methodically dismantled and reconstructed a system based on a worldview of immigration as a security and economic threat to Americans,” the think tank said.

Among the huge tasks that Biden will inherit will be management of US Immigration and Customs Enforcement detention centers, which now hold some 15,000 people caught without documentation.

Here, too, he has made promising gestures: After complaints alleging improper treatment that led to the death of some migrants, including minors, Biden promised ICE staff will be held accountable for inhumane treatment.

And to lead the Department of Homeland Security, which runs these centers, Biden has nominated Alejandro Mayorkas, who came to the US as an immigrant from Cuba.

But despite these encouraging signs, wariness remains.

Jorge Benitez, another Dreamer, said he still feels the fear he did under Obama, under whom the deportation of undocumented foreigners hit record levels.

Biden, he said, “was a part of that. He was an active player, very much. So yeah, we still have to be cautious.”

The sentiment is shared by William Martinez, who arrived from El Salvador with his family after their country was devastated by an earthquake in 2001.

They were granted so-called Temporary Protected Status, which is given to people from countries suffering from natural disasters or political instability. Trump tried to kill off this program, too. The case is tied up in the courts.

Martinez, 28, said he does not expect much help from Biden for TPS beneficiaries and is instead looking to Congress, believing the solution lies in bipartisan legislation.

He will campaign for the January 5 runoffs that will determine control of the Senate.

“We are going to Georgia,” he said. “We need a good Congress that agrees with us to pass legislation.”

Avila was deported from the US after years of drug addiction and stints in prison.

“You’ve served your usefulness,” he said of the decision by the same government he fought for in Vietnam. “And we don’t need you anymore so you can be deported.”

He now lives in Tijuana after repeated attempts to return to the US. For him, every day in Mexico is “a struggle.”

But he sees Biden as empathetic and open-minded on immigration — and hopes that if he can find a solution for DACA, it would allow people like him who have been deported to make the case for returning.

“I do feel very optimistic about this new administration coming in,” he said.