Fireworks explode over empty streets as 2020 slinks away into history 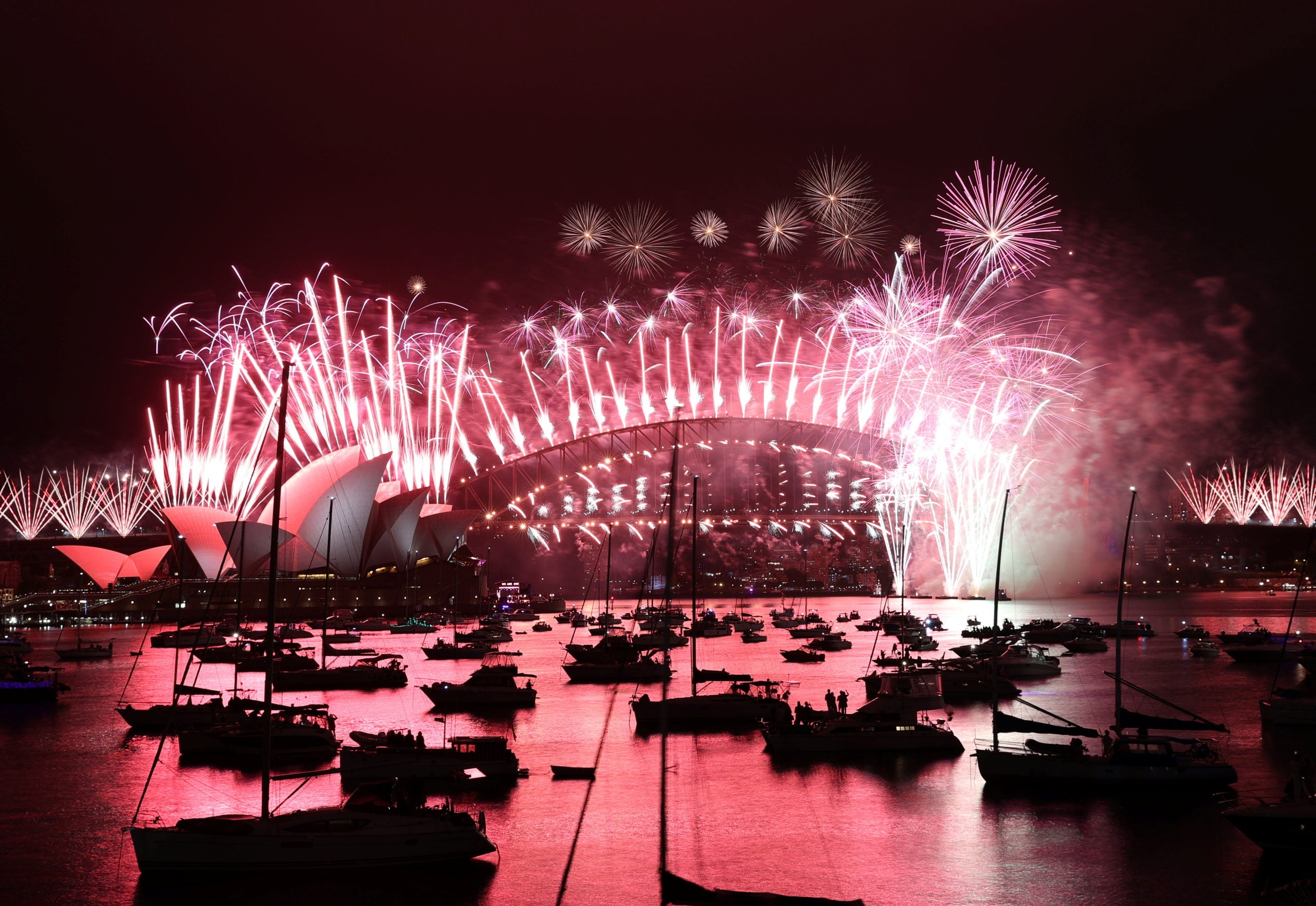 Fireworks explode over the Sydney Opera House and Sydney Harbour Bridge during downsized New Year’s Eve celebrations due to an outbreak of the coronavirus disease (COVID-19) in Sydney, Australia, January 1, 2021. REUTERS/Loren Elliott

The Sydney Opera House fireworks soared into the sky, but the harbor below was empty as a ghost town, a fittingly creepy send-off for a year that will not be missed.

No light show will illuminate Beijing from the top of the TV tower. The lions of London’s Trafalfar Square will be barricaded off. In Rome, crowds will not assemble in St Peter’s Square, the Pope will lead no mass, and revelers will not make their yearly dive into the Tiber.

The New Year’s Eve ball will drop on Broadway. But in place of hundreds of thousands of New Yorkers packed shoulder-to-shoulder into Times Square, the audience will be a small pre-selected group of nurses, doctors and other key workers, their families kept six feet apart in socially distanced pens.

With more than 1.7 million people dead and 82 million infected around the globe since last New Year’s Eve – yet hope that new vaccines can help tame the pandemic – this year’s end is like none other in memory. Angela Merkel, in her 16th New Year’s Eve address as German chancellor, said as much.

“I think I am not exaggerating when I say: never in the last 15 years have we found the old year so heavy. And never have we, despite all the worries and some skepticism, looked forward to the new one with so much hope.”

“I can only imagine how bitter it must feel for those mourning loved ones lost to corona or who are having to fight against the repercussions of an illness when the virus is disputed and denied by some hopeless individuals,” said Merkel, 66, who said she would get vaccinated as soon as practicable.

Germany has banned the sale of fireworks to discourage crowds. Authorities in Berlin said police would “punish violators consistently”. 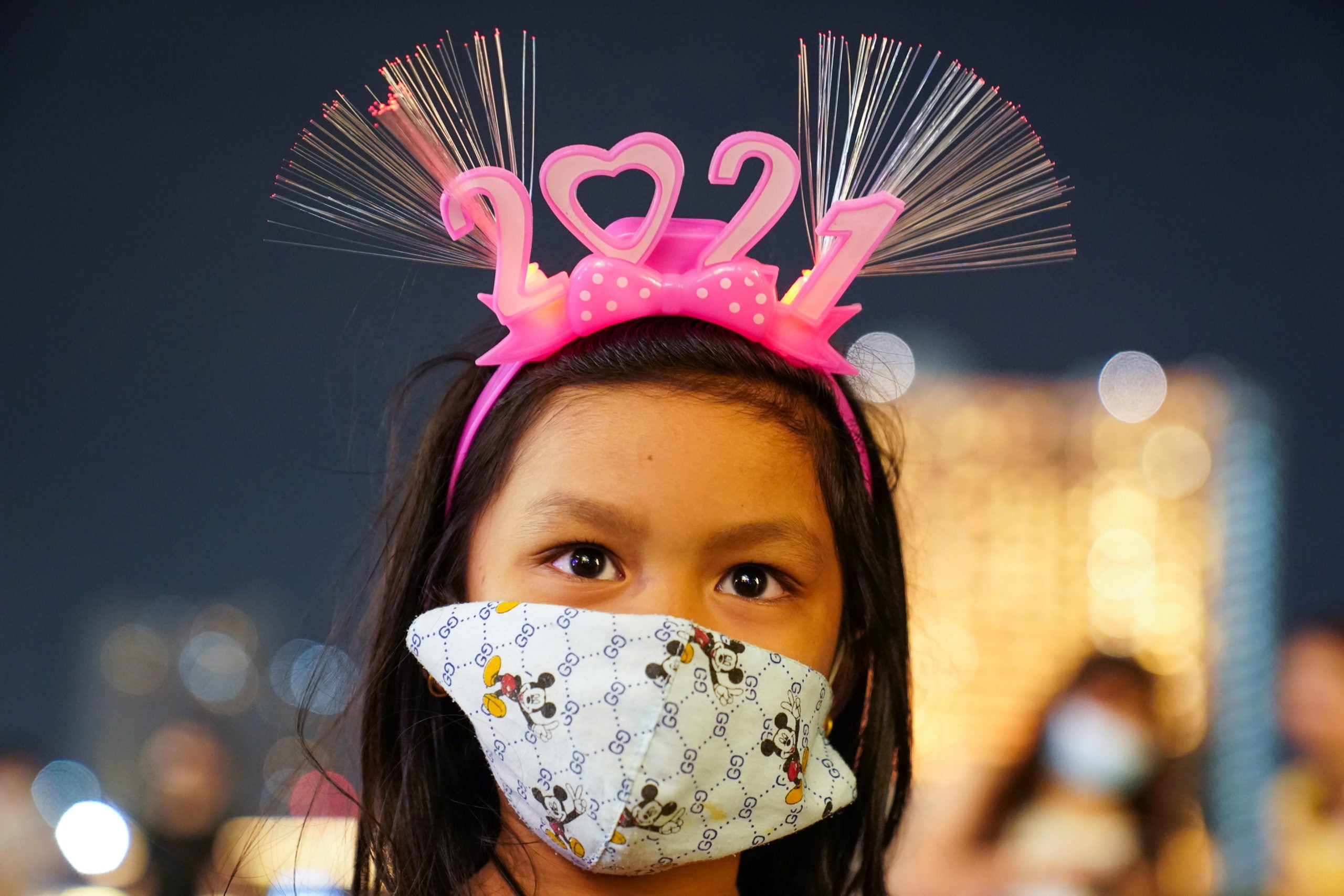 A girl wearing a mask and “2021” head band looks on at a shopping mall as The New Year countdown celebrations and crowded events were banned amid the spread of the coronavirus disease (COVID-19) in Bangkok, Thailand, December 31, 2020. REUTERS/Athit Perawongmetha

In the Chinese city of Wuhan, where the pandemic originated a year ago, thousands were expected to gather at popular landmarks across the city center for the countdown to 2021. Some said they were being cautious, but weren’t particularly worried.

In Australia, where the Sydney Opera House fireworks are televised around the world as the first big visual display of the new year, movement has been restricted, gatherings banned and internal borders shut. Most people were barred from coming to Sydney’s downtown on Thursday night.

“What a hell of a year it’s been,” said Gladys Berejiklian, premier of New South Wales state, which includes Sydney. “Hopefully 2021 will be easier on all of us.”

In Britain, where a highly contagious variant of the virus is rampaging and most people are under strict restrictions, authorities ran a public messaging campaign on billboards and in the media urging people to “see in the New Year safely at home”.

Barriers were erected in public places such as London’s Trafalgar Square and Parliament Square.

In Italy, the European country which has seen most COVID-19 deaths, bars, restaurants and most shops were closed, and a curfew in place for New Year’s Eve between 10 p.m and 7 am.

Pope Francis canceled plans to lead New Year’s Eve and New Year’s Day services because of a flare-up of his sciatica condition, the Vatican said.

In France, where a night curfew will also be in force, no more than six adults will be allowed to gather around the dinner table, but there will be celebrations – small, perhaps, but with style.

At “A la Ville de Rodez”, an upmarket Parisian delicatessen, manager Brice Tapon was preparing packages of foie gras, truffles and pate for groups of two or three.

“I will… stuff myself with foie gras, champagne and all this food,” said Annie Chaplin, a customer. “And I’ll stay home.”