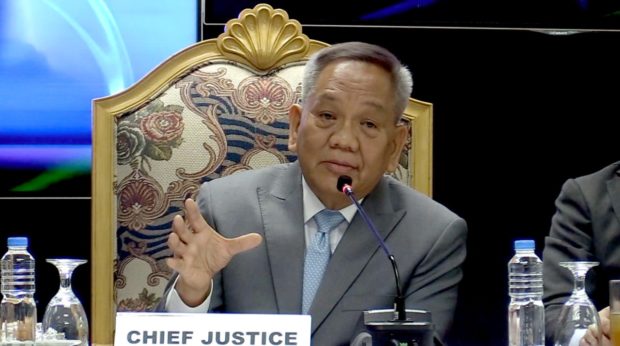 MANILA, Philippines — The year 2020 is a celebration of heroes, Chief Justice Diosdado Peralta said in his New Year message.

Peralta paid tribute not only to the health workers and other frontliners but also to the magistrates, judges, court officials, and employees.

“The past year has been a celebration of heroes. I salute all our health workers and our frontliners who continue to our heroes during this crisis. They all have been relentless in going beyond the call of duty to provide their services and look after our well-being,” he said in a statement.

“I also pay homage to another set of heroes: the magistrates, judges, court officials, and employees who carry on with their unwavering commitment and dedication by going to work each day even during the height of lockdowns. They risk their health and safety in order to make sure that our courts would always be open to the public for the redress of their grievances. They have shown and proven that a pandemic will not and cannot get in the way of dispensing justice. I am truly grateful for their genuine sense of duty,” Peralta added.

Peralta said he also applauds each and every Filipino “for being heroes in our own way; despite the pandemic, we manage to remain hopeful for a better tomorrow.”

“With a new year comes hope. Let us all do our share in helping rebuild and heal our nation,” Peralta said.

Peralta’s tenure as Chief Justice coincided with the pandemic. He has a 10-point program that was supposed to stretch for the duration of his term up to March 2022 but most of which has to be implemented as soon as possible for the judiciary to cope up with the pandemic.

The pandemic has forced court processes to a halt and strict health protocols have created a struggle for court employees, litigants.

The high court has implemented several measures to make sure that the “wheels of justice will continue grinding.”

Among the measures include the online filing of court pleadings and nationwide implementation of case adjudication via video conferencing.

The Court has also adopted a four-day workweek or Mondays to Fridays from 7:30 a.m. to 5:30 p.m. while the remaining 20 percent take a one-day leave. The one-day leave during weekdays has been implemented alternately among court officials and employees so that each of them would be able to render the required 40 hours of work weekly.

Peralta earlier assured that: “The courts are not shutting down in times of emergencies.”

Peralta will retire a year early or in March 2021.