91% of Filipinos to welcome 2021 with hope, latest SWS survey says 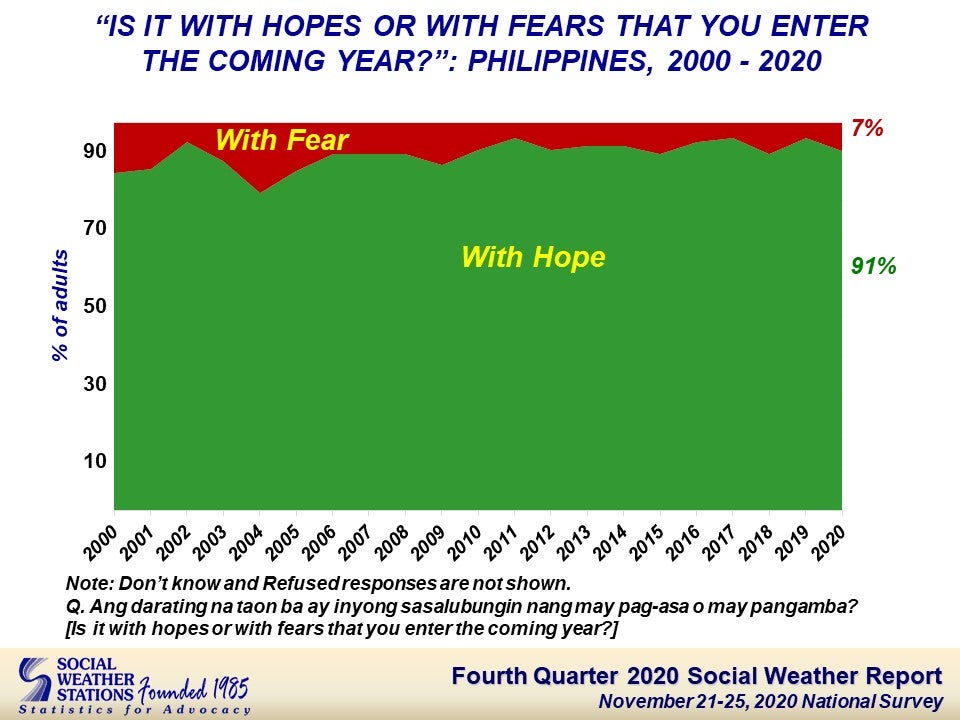 MANILA, Philippines — Ninety-one percent of adult Filipinos are entering 2021 with hope instead of fear, according to the latest Social Weather Stations (SWS) survey released Tuesday.

But the 91 percent of optimistic Filipinos, SWS said, is five points down compared to the 96 percent recorded in 2019, and the lowest since the pollster’s record of 89 percent back in 2009.

The seven percent of people who said they will enter 2021 with fear, meanwhile, are three points up from 2019’s record of four percent.

According to the SWS, those who said they are entering 2021 with hope are high among “not poor” and “borderline poor” families with 94 and 93 percent respectively, and 89 percent among “poor” families.

SWS said that the survey was conducted from Nov. 21 to 25 using face-to-face interviews — the first in 2020 due to the COVID-19 pandemic.

A total of 1,500 adult Filipinos (18 years old and above) participated in the survey, and the poll had a sampling error margin of ±2.5 percent for national percentages, ±4 percent for Balance Luzon, and ±6 percent for Metro Manila, the Visayas, and Mindanao.

Read Next
Palace: No expansion of travel ban yet but it was ‘highly recommended’ to Duterte
EDITORS' PICK
Driving can be even more rewarding this New Year — here’s why
IATF eyes shift to ‘new normal’ for areas without Covid-19 transmission
New Year, New Rediscoveries
Ombudsman junks raps vs Acosta, Erfe over Dengvaxia issue
PH Red Cross completes study on Covid-19 saliva test — DOH
Experience clearer calls nationwide with Smart VoLTE
MOST READ
‘I was betrayed’: Crisha Uy reacts to love life of ex Joem Bascon
Jolina Magdangal reveals being scammed when she bought cactus online
Iya not taking blessings during challenging times for granted
Man gets knickers in a bunch, shoots another man after losing wife’s undies
Don't miss out on the latest news and information.