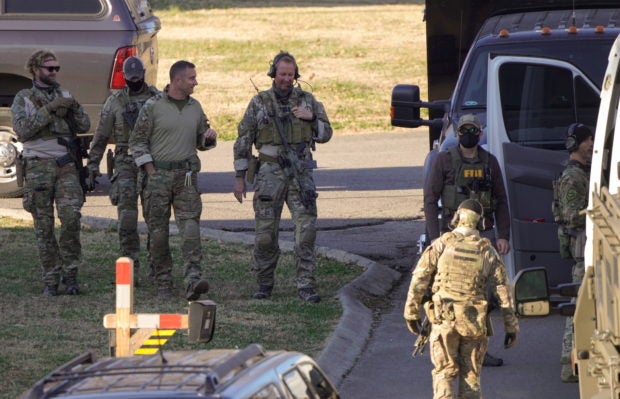 NASHVILLE, Tennessee — Authorities searched a house in the Nashville area on Saturday as they probed the large blast that ripped through the downtown of the southern US city on Christmas morning, injuring several people and damaging dozens of buildings.

The operation in Antioch came as US media reports said a 63-year-old “person of interest” had been identified in connection with the explosion, which came from a parked motorhome that blared a warning minutes before it blew up.

Some US media outlets reported Saturday evening that the bomber may have been killed in the blast, but authorities have not officially confirmed anything.

Friday’s explosion in historic downtown Nashville, the United States’ country music capital, damaged about 40 buildings and injured at least three people, with the streets largely abandoned at that hour.

Authorities were examining tissue found at the blast site that they believe could be human remains.

Police say the blast was an “intentional act” but the motive remained unclear, and FBI behavioral analysts were involved in the investigation.

“The damage is shocking and it is a miracle that no residents were killed,” Tennessee Governor Bill Lee said on Twitter on Saturday.

Media reports said neighbors had previously spotted a motorhome outside the residence that was being searched Saturday by authorities, and that it appeared to be similar to the one that exploded in Nashville.

No one has been arrested, but “information developed during the course of the investigation led us to this address,” an FBI spokesman said in an interview with the Nashville Tennessean newspaper outside the home being searched.

At a separate press conference, authorities declined to provide details or discuss the reports of a person identified.

They said they were sifting through more than 500 leads and tips and that sweeps of the area found no further explosive devices.

Federal prosecutor Don Cochran said the scene was “like a giant jigsaw puzzle created by a bomb that throws pieces of evidence across multiple city blocks.”

The investigation included about 250 FBI agents, analysts and other staff, said the agency’s Doug Korneski.

“We have over 500 investigative leads and we’re following up on every one of those,” Korneski told reporters.

“So there are a number of individuals that we’re looking at. So at this point, we’re not prepared to identify any single individual.”

He added, however, that “at this point we don’t have any indication that we are looking for another subject.”

The governor toured the site on Saturday and said he had asked President Donald Trump to declare a state of emergency, a technical move that triggers federal assistance in repairing damage.

“These buildings, many of which are historic, and others will need to be assessed by an engineer for structural integrity and safety,” Lee said in his request.

According to a timeline provided by the authorities, police were called to the area to respond to gunfire at 5:30 am, and officers spotted the motorhome at 6:00 am.

Fifteen minutes later, they heard an audio countdown coming from the vehicle warning of a bomb — interspersed with music — and the need to evacuate.

Police have not said if anyone was inside the motorhome at the time but lauded the officers who arrived at the scene and took quick action.

“Instead of taking it as just maybe a threat and calling in and getting resources, they immediately began knocking on doors, they coordinated the resources to get everyone evacuated and out,” Nashville Police Chief John Drake said.

The motorhome was parked in front of a building for phone company AT&T, causing damage that disrupted telecommunications service in Tennessee as well as parts of Alabama and Kentucky.

AT&T said Saturday that two portable cell sites were operating in downtown Nashville and additional portable sites were being deployed in the region to restore service.