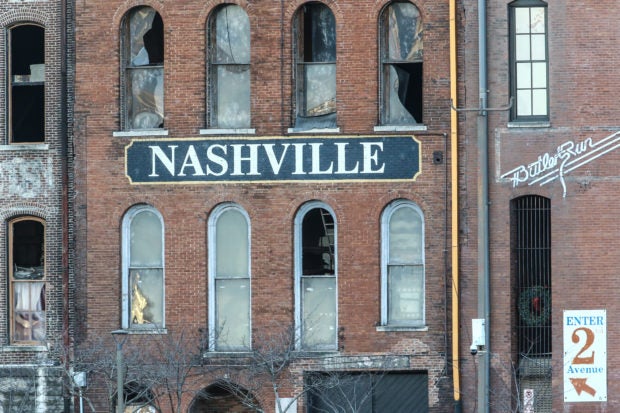 NASHVILLE, TENNESSEE – DECEMBER 25: Police close off an area damaged by an explosion on Christmas morning on December 25, 2020, in Nashville, Tennessee. A Hazardous Devices Unit was en route to check on a recreational vehicle which then exploded, extensively damaging some nearby buildings. According to reports, the police believe the explosion to be intentional, with at least 3 injured and human remains found in the vicinity of the explosion. Terry Wyatt/Getty Images/AFP

A parked motor home exploded in downtown Nashville on Christmas morning in what police described as an “intentional act,” and fire officials reported taking three people to hospital but none were critically injured.

Police initially responded to an emergency call of “shots fired” in the downtown tourist area about 6 a.m. CST (1200 GMT), when they reported seeing the vehicle, said Nashville police spokesman Don Aaron, without specifying what made it suspicious.

“Circumstances about the vehicle caused the officers to call the bomb squad,” Aaron said. The bomb squad was on the way when the explosion occurred.

“We do believe that the explosion was an intentional act,” he said, describing the explosion as “significant” and adding that police were working with federal authorities including the FBI and the Bureau of Alcohol, Tobacco, Firearms and Explosives.

Andrew McCabe, a former deputy FBI director, told CNN police may have been the target of the explosions given they were answering the report of a suspicious vehicle when it blew up. He said an explosion of this size would be investigated as a possible act of terrorism, whether domestic or foreign.

Moments before the blast, police officers went door-to-door in nearby buildings to hustle residents to safety and motioned a man walking his dog near the vehicle to change direction.

Police said it was not immediately clear if anyone was inside the motor home when it exploded.

The explosion, which could be felt nine blocks away, knocked one officer off his feet and caused what was hoped to be only a temporary hearing loss, the spokesman said. Residents reported seeing a number of other vehicles on fire amid the debris.

Most of the buildings were closed given the hour and Christmas holiday in the heart of the city, the capital of both the state of Tennessee and U.S. country music.

The explosion destroyed several other vehicles and damaged several buildings, launching black smoke in the sky that could be seen for miles.

“We are not aware of any other attempted explosion,” the spokesman said.

President Donald Trump was briefed on the explosion, a White House spokesman said.