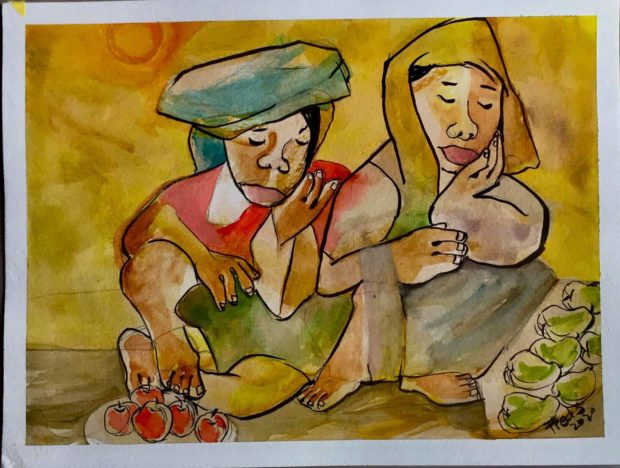 MANILA, Philippines — Two unexpected developments nearly made it impossible for Angelo Villamar, a second-year business administration student at the Polytechnic University of the Philippines in Manila, to finish his studies.

In May, his father lost his job as a tricycle driver due to the pandemic. Two months later, he passed away.

“After that, I didn’t know how I could continue with my studies,” Villamar said.

But with the help of Ayuda Pang Eskwela (Aid for School), his simple request for a secondhand laptop to allow him to attend online classes was granted.

Villamar said that one of the donors had told him, “Hold on. Help will come. Don’t give up and just go on despite the hardships you are going through.”

“To be honest, that was the point that I wanted to surrender due to the several problems our family had this year. But they have taught me to hope and have faith,” Villamar said.

Since it started in August, Ayuda Pang Eskwela has been able to link 542 students, including Villamar, who are in need of gadgets for online learning with potential donors. It has also helped raise over P2.6 million for beneficiaries.

Ayuda founder Diane Reyes, a graduate of the University of the Philippines, said that she started the group on Aug. 1, with 20 of her friends volunteering their help. At present, there are now over 3,000 members.

“So we really, really need help to get more donors,” she said. “Most of the volunteers are from the corporate world. We are doing this on top of our day jobs,” Reyes said.

Under the rules, students asking for help are discouraged from sending a private message to donors. They can post their appeals on the group’s Facebook page, subject to the approval of the group moderators. Once approved, donors may start sending their donations to the beneficiaries via GCash.

Recently, the group launched Ayuda Art, a private art auction on Facebook done in collaboration with featured artists, with half of the proceeds going to the student-beneficiaries.

According to Reyes, the most common requests sent by students and their parents are for laptops — even if these are secondhand — tablets, pocket WiFi, and printers.

“What makes the group different is that we put extra effort [into getting] to know the beneficiaries through our moderators. We set targets with them, and we make sure we hit those targets because we are results-focused people,” she said.

Daisy Caspe’s son, Clark, a Grade 8 student of Quezon City Science High School, was one of the group’s beneficiaries. He received a secondhand laptop which, according to her, further motivated him to fulfill his dream of becoming a journalist-lawyer.

Caspe said that the donated gadgets were a lifesaver as many parents had lost their jobs due to the COVID-19 pandemic.

For Jorge Pantoja, a 25-year aide working in a contractual agency, without the gadgets from Ayuda, his two children would have been forced to drop out of school this year.

He also feared for his children’s health and safety should they have no choice but to go to computer shops to complete their class requirements.

“We are hard-pressed for money to buy gadgets for online classes but through Ayuda, we now have money to buy laptops and prepaid wifi connection for the children…,” Pantoja said.

His eldest is a 2nd-year financial management student at the Pamantasan ng Lungsod ng Maynila while the youngest is a criminology freshman at Unibersidad de Manila.

Grace Loterte, a senior citizen, had lent her cell phone to her daughter Gillian, a sophomore at Manila Tytana Colleges, and three grandchildren Reignsley, 17; Ralf, 13 and Carl, 7 — grade school and high school students from Pasay City — for their online classes.

But she knew it would be nearly impossible for the four students to survive on just one cell phone so she posted an appeal on the social media account of Ayuda which acceded to her request.

According to her, it would have been impossible for her to buy gadgets for the children as she has no income.

Xaniel Fincalero, 19, an incoming second-year student from the National University in Manila, said he was hesitant at first to ask for help from the group, thinking it was all a scam to extract his personal information.

“Not until my request was approved and I saw how many were provided with the gadgets they needed [did I believe,”] he said.

According to him, he only wanted a secondhand laptop, but an anonymous donor also gave him a WiFi kit after learning he also needed an internet connection.

“As a college student, the gadget is really necessary since blended learning will be implemented. All the worksheets, lectures, and exams are posted online. We also need to communicate with our teachers. Not to mention, some professors are really inconsiderate. So the gadget and the internet are our only hope to cope with the ‘new normal,'” Fincalero said.

According to him, his mother who was raising him singlehandedly had lost her job because of the pandemic.

To earn money for their basic needs, including food, she had resorted to selling handmade face masks from which she earned at least P200 a day.

“Thank you is not enough. We received help from strangers who did not doubt us or hesitated. I hope one day, I’ll be the one giving assistance to others and paying it forward,” he said.