WASHINGTON — The U.S. Justice Department sued Walmart Inc on Tuesday, accusing the retailer of fueling the opioid crisis in the United States and ignoring warning signs from its pharmacists, according to a court filing.

The retailer’s shares fell about 2% following the news.

The lawsuit, filed in U.S. District Court in Delaware, accused Walmart of failing to take its gatekeeping duties as a pharmacy seriously. 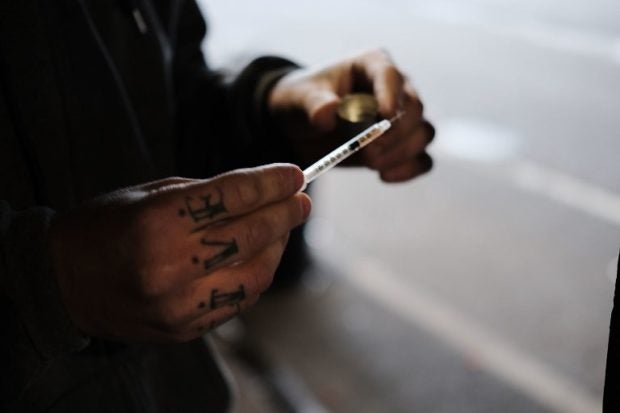 (FILES) In this file photo taken on January 24, 2018 a man uses heroin under a bridge where he lives with other addicts in the Kensington section, which has become a hub for heroin use in Philadelphia, Pennsylvania. The US opioid epidemic is accelerating, with hospital emergency room visits for overdoses from drugs like heroin, fentanyl, and prescription painkillers up 30 percent from 2016 to 2017, US officials said on March 6, 2018. Substantial increases in overdoses were seen nationwide, said the report released by the US Centers for Disease Control and Prevention.”Long before we receive data from death certificates, emergency department data can point to alarming increases in opioid overdoses,” said CDC acting director Anne Schuchat. / AFP PHOTO / GETTY IMAGES NORTH AMERICA / SPENCER PLATT

Walmart, the world’s biggest retailer, created a system that turned its 5,000 in-store pharmacies into a supplier of highly addictive painkillers, dating as early as June 2013, the lawsuit said.

Walmart’s actions helped “fuel a national crisis,” said Jeffrey Bossert Clark, the acting head of the Justice Department’s civil division, who declined to say how much precisely the government was seeking in penalties from Walmart.

In October, the retailer filed a lawsuit against the federal government seeking clarity on the roles and legal responsibilities of pharmacists and pharmacies in filling opioid prescriptions.

The opioid epidemic has claimed the lives of roughly 450,000 people across the United States since 1999 due to overdoses from prescription painkillers and illegal drugs.