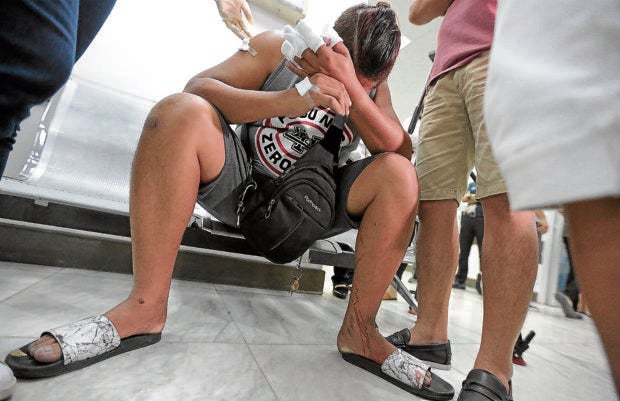 HOLIDAY INJURIES A man with a firecracker injury is treated at Jose Reyes Memorial Center in this photo taken on Jan. 1, 2019. The Department of Health recorded a total of 164 firecracker injuries from Dec. 21, 2019, to Jan. 1, 2020, a decline of 35 percent during the same period in the previous year, which authorities attribute to stricter regulations on the use of firecrackers. —INQUIRER FILE PHOTO

MANILA, Philippines — Metro Manila’s 17 local governments have agreed to ban firecrackers in the metropolis to reduce the risks of firecracker injuries and prevent mass gatherings as part of health measures during the new coronavirus pandemic.

The Regional Peace and Order Council-National Capital Region (RPOC-NCR) passed a resolution in a meeting last week, enjoining the local governments to pass resolutions or ordinances to implement the prohibition on the use and sale of firecrackers.

The ban, however, does not include pyrotechnics. Community fireworks displays are allowed but should be approved first by the local governments, according to Police Brig. Gen. Vicente Danao Jr., chief of the National Capital Region Police Office and a vice chair of the council.

While local councils have yet to pass ordinances, Danao on Monday said violators would only be warned not to commit the same offense.

President Rodrigo Duterte earlier said he was considering the imposition of a firecracker ban nationwide by December next year for public health and safety. Once enacted, the policy would kill the local firecracker and fireworks industry, particularly that of Bocaue’s in Bulacan province.

On Monday, the President said he was aware of the concerns of manufacturers who had appealed to him to reconsider his decision as it would put people out of jobs.

“I really understand you. I might even sympathize with you. Loss of earnings and you are driven out of business. But the problem is the higher duty of government to protect public interest, public health,” he said.

Among the firecrackers that caused injuries are “kuwitis,” “luces,” fountain, piccolo, and baby rocket. Of the five, only piccolo is considered illegal.

Authorities attributed the decline in injuries to Executive Order No. 28, which the President issued in 2017, mandating stricter regulations on the use of firecrackers and confining the use of pyrotechnics to community fireworks displays.

Health Undersecretary Myrna Cabotaje said that in lieu of community fireworks displays, the DOH was recommending safer alternatives, such as virtual celebrations or small gatherings with family members and the use of alternative “merrymaking noise tools.”

Duterte said none of the manufacturers had been held responsible for the injuries caused by their products. He said he had never seen any manufacturer held accountable for inferior or wrongly manufactured firecrackers.

“Until and unless we can come up with that, we cannot run after you,” he added.

He also noted that the firecrackers sold to the public did not contain information about the manufacturers or the warranties they provide, and even safety warnings.
This makes it difficult for people to seek accountability for inferior products that cause injuries, he said.

“There is no name, there is nobody that people can run after. And yet, they are using a product made by you which is capable of death, be getting blind, losing your fingers,” the President said.

Parañaque City Mayor Edwin Olivarez, who concurrently chairs the RPOC-NCR, signed Resolution No. 19 urging local governments to ban firecrackers during the fourth-quarter meeting of the council on Dec. 15. The 56-member body is composed of the 17 mayors of Metro Manila and representatives from national government agencies.

Only Muntinlupa, Makati, and Quezon City have ordinances banning the sale and use of firecrackers in their localities, with violators facing fines or imprisonment.

On Tuesday, an environment and health watchdog backed the RPOC-NCR resolution. saying it would greatly benefit public health and the environment.

“We expect concerned local government[s] to heed the council’s recommendation, adopt the necessary policy measures and conduct effective public information and law enforcement activities to ensure zero use of dangerous and polluting firecrackers in their areas of jurisdiction,” Thony Dizon, chemical safety campaigner of Ecowaste Coalition, said in a statement.

“Local government[s] in other regions, we hope, will do the same for the health and safety of their constituents and the protection of the ecosystems,” Dizon said.

In November, Ecowaste Coalition wrote to the Inter-Agency Task Force for the Management of Emerging Infectious Diseases, proposing a national ban on firecrackers and fireworks amid the health and climate emergencies in the country.

Celebrating with fireworks and firecrackers encourages mass gatherings, an activity that is discouraged during the coronavirus pandemic. it said.

“Even minor injuries resulting from firecracker and firework accidents will require emergency care and treatment at a hospital … further straining an already overburdened health-care system,” the group said. —WITH REPORTS FROM LEILA B. SALAVERRIA AND JHESSET O. ENANO INQ