CEBU CITY — At least four mineworkers were killed while six remained missing after a landslide occurred in a mining pit in Toledo City, Cebu province, on Monday afternoon.

In a statement released on Tuesday, Carmen Copper Corp. (CCC), a subsidiary of listed Atlas Consolidated Mining and Development Corp., said search-and-rescue operations had been ongoing as of 3 p.m. in Carmen Pit. The workers’ identities had yet to be released pending verification by the company.

CCC blamed the landslide on the “incessant rains for the past several months” which was aggravated by Tropical Depression Vicky, which crossed parts of the Visayas and Mindanao last week.

Initial findings by the Mines and Geosciences Bureau (MGB) showed that the landslide might have been triggered by the weakened contact of the limestone and mudstone layer in the site’s rock base, as these were already waterlogged from earlier typhoons.

The Philippine Coast Guard sent two dogs from its K-9 units to Toledo to help in rescue efforts.

“As of this time, we are in close coordination and communication with the affected immediate families and will continue to extend the needed support and assistance,” CCC said.

“The management of CCC is doing all the necessary action to assess and address the overall situation. We will continue to inform the concerned agencies as well as the general public of further developments,” it said.

A minor fault line, called Barot Fault, was also observed in the slide area and this might have contributed to the disaster, said MGB Director Wilfredo Moncano.

When prodded about the existence of a mining site in a fault line, Moncano stressed that minor faults that were unnoticeable on the surface were not considered during mine designs, unlike major faults that needed to be avoided.

He said CCC passed the independent audit conducted by the Mining Industry Coordinating Council this year and in 2017. The company has suspended all activities and operations in the mining area following the tragedy.

The MGB office in Central Visayas sent a team from the Mine Safety, Environment, and Social Development Division to conduct an assessment in CCC’s mine site.

Pedro Sepada Jr., village chief of Biga where the mine operates, said he had sent letters to the MGB regional office, Toledo Mayor Joie Piczon-Perales, and Cebu Gov. Gwendolyn Garcia last month to inform them about CCC’s mining activities that were only 300 meters away from residential areas in his village.

The complaint, he said, fell on deaf ears.

Last year, Sepada said he summoned officials of CCC about its operations in his village, but no representative came to talk with him. “We have already seen some cracks on the soil for some time now but we can only do so much. I didn’t hear any response from them,” he said.

“Now, what we fear happened,” said Sepada, whose four cousins, all in their 20s, were among the missing. 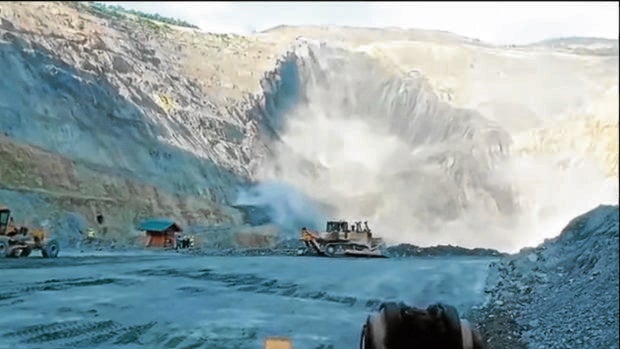 TRAGEDY SITE This video grab shows the collapsed section of a mine pit of Carmen Copper Corp. in Toledo City. Rescue teams are still searching for six people buried in the landslide that hit the area on Monday afternoon. —CONTRIBUTED PHOTO

The Toledo copper mines, 46 kilometers west of Cebu City, used to be the biggest copper mine in Asia until it stopped operations due to falling copper prices in 1994.

In 2007, CCC rehabilitated the mines and resumed operations the following year, producing an average of 45,000 dry metric tons of copper ore every day.

The area has three open pits, but only Carmen Pit is active. Biga Pit serves as the mine site’s tailings storage facility while Lutopan Pit is expected to resume operations next year.

The company is the biggest tax contributor in Toledo.

The Chamber of Mines of the Philippines (COMP), the biggest organization for large-scale mines where Atlas is a prominent member, described the incident as “unfortunate.”

“Atlas is known for its strict adherence to the highest safety and health standards,” COMP said.

“Nevertheless, accidents happen in any industry. This is why the chamber and its members are constantly looking for ways to further improve our safety and health protocols … the important thing is for the industry to learn lessons from incidents such as this to continue to improve on its protocols and practices,” it added. —WITH A REPORT FROM JEANNETTE I. ANDRADE INQ