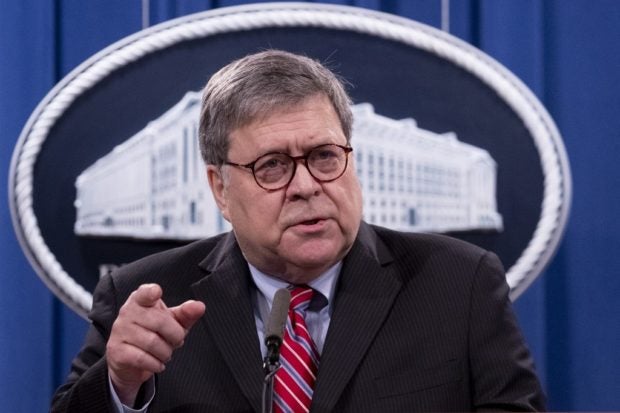 WASHINGTON — US Attorney General Bill Barr said Monday that Russia was behind the massive hack of US government computer systems, contradicting President Donald Trump’s suggestion that China could be involved.

Two days after Trump downplayed what intelligence experts have called the most devastating break in US computer security in years, Barr said he agreed with Secretary of State Mike Pompeo’s attributing the hack to Moscow.

“From the information I have, I agree with Secretary Pompeo’s assessment. It certainly appears to be the Russians,” he said, declining to add any details.

Last week the Cybersecurity and Infrastructure Security Agency (CISA) said US government agencies, critical infrastructure entities, and private sector organizations had been exposed in the months-long cyberattack, in which hackers broke through a widely used piece of security software created by the US company SolarWinds.

Officials are still combing their systems to see what kind of information could have been stolen — including possibly from US spy agencies — and whether they are still vulnerable.

While CISA did not identify the attackers, private security consultants, senior US legislators briefed by intelligence officials, and Pompeo all pinned the blame on Russia.

Trump, who over four years has steadfastly avoided criticizing Moscow — particularly its alleged sweeping interference in the 2016 election on his behalf — on Friday again refused to finger Russia in the hacking case.

“The Cyber Hack is far greater in the Fake News Media than in actuality,” he tweeted, saying “everything is well under control.”

“Russia, Russia, Russia is the priority chant when anything happens,” he continued, adding that the media were, “for mostly financial reasons, petrified of discussing the possibility that it may be China (it may!).”

Barr, who has been a crucial political ally of Trump, is to step down from his position this week, a month before Trump exits the White House on January 20 after his election loss last month to Democratic President-elect Joe Biden.

While as attorney general he has avoided contradicting Trump, on Monday he also rejected calls by the president and his allies to launch special prosecutor investigations of Biden’s son Hunter and of alleged fraud in the election.

Barr repeated what he said on December 12, that he saw no significant or systemic fraud that would affect the November election results.

Barr declined to comment more broadly on Trump’s efforts in courts and in public to overturn the election, including reports that the idea of declaring martial law had been floated by advisors during a White House meeting last week.