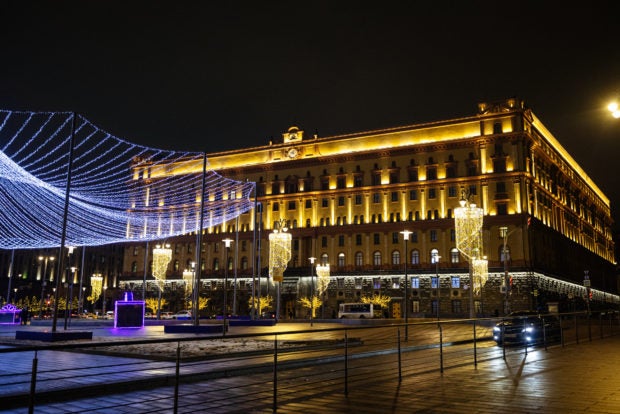 MOSCOW — Russian opposition leader Alexei Navalny said Monday he had tricked a security agent into admitting the Federal Security Service (FSB) sought to kill him this summer and placed poison in his underwear.

In a blog post, the Kremlin critic said he phoned a man named Konstantin Kudryavtsev, who he said was a chemical weapons expert with the FSB domestic intelligence agency.

“I called my killer. He confessed everything,” Navalny said on Twitter, a claim rejected later Monday by the FSB.

Navalny said he disguised his phone number and presented himself as an aide to Security Council chief Nikolai Patrushev, saying he needed information for an official report on the attempted poisoning.

The opposition leader published an audio recording and a transcript of the phone call and released a video of him conducting the conversation.

He said that voice analysis “would demonstrate that it is indeed” Kudryavtsev speaking.

In the audio recording, the voice on the other end of the line initially sounds hesitant and cautious but eventually tells the story and explains why Navalny managed to survive the poison attack.

The FSB late Monday described the phone call as a “provocation aimed at discrediting” the agency.

It said that the phone conversation “about the alleged actions against” Navalny would not have been possible without “the support of foreign intelligence services,” adding that the video the Kremlin critic published of the call was “fake”.

Navalny, 44, fell violently ill during a flight from Siberia to Moscow in August and was hospitalised in the Russian city of Omsk before being transported to Berlin by medical aircraft.

Experts from several Western countries concluded that the Kremlin critic was poisoned with the Soviet-era Novichok nerve agent — a claim that Moscow has repeatedly denied.

A joint media report led by the Bellingcat investigative website last week revealed what it said were the names and photos of chemical weapons experts from the FSB that had tailed Navalny for years.

– Poisoned underwear –
In his blog post on Monday, the opposition leader said that last week he called the security agents identified in the report. He said nearly all hung up on him except the man he said was Kudryavtsev.

During that call the person believed to be Kudryavtsev said that his unit had not expected the pilot to make an emergency landing in Omsk.

He said that if the flight had been allowed to continue, Navalny would not have survived.

In the recorded comments, the agent said an attacker had placed the poison along the inner seams of a pair of Navalny’s underwear.

He detailed how he and another FSB agent had flown to Omsk after the poisoning and removed any trace of the poison.

However, Kudryavtsev never explained his exact role in the operation.

On Monday Navalny’s associate Lyubov Sobol went to a building on the outskirts of Moscow where the Bellingcat report said Kudryavtsev lives.

According to video she livestreamed on her Twitter account, police surrounded her car and later detained her.

Journalists also arrived at the scene and rang the doorbell to Kudryavtsev’s reported apartment, but no one came to the door.

– ‘They are dumb’ –
Bellingcat as well as Der Spiegel and Russian website The Insider were given access to Navalny’s account and also published reports on Monday.

“I’ve been covering the FSB for years and never thought that they were great professionals. But Navalny’s prank comes as shock even for me,” Russian journalist Irina Borogan wrote on Twitter.

“They are dumb and that makes them even more dangerous,” she added.

Last week President Vladimir Putin rejected reports that the FSB had poisoned Navalny, though he suggested the Kremlin critic is supported by US intelligence and if that is the case then Russia should tail him.

“But this does not at all mean that it is necessary to poison him. Who needs him?” the Russian leader said.

If the Russian special services had wanted to poison Navalny, “they would have taken it to the end,” he added.

Putin has refused to pronounce Navalny’s name in public, instead referring to him as “the patient in Berlin”, among other things, when asked directly about the opposition leader.

Navalny has said that Putin was behind his poisoning and that he will return to Russia once he has made a full recovery in Germany.