SWS: 62% Filipinos say quality of life worsened in the past 12 months

MANILA, Philippines — Sixty-two percent of adult Filipinos believed that their quality of life worsened in the past year.

This was according to a November 2020 survey of the Social Weather Stations (SWS) that was released to the public on Monday.

The pollster likewise said that 24 percent of Filipinos said their lives stayed the same or were unchanged while 14 percent believed that it got better. The survey was conducted on November 21-25, 2020. 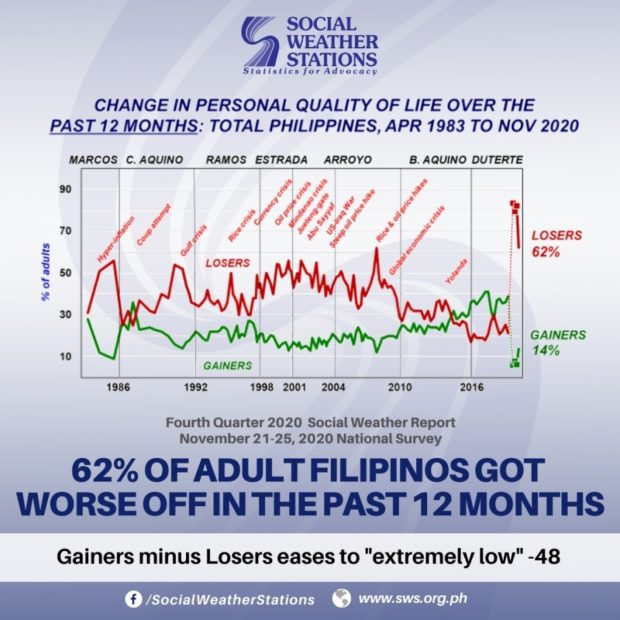 This graph shows 62 percent of adult Filipinos believed that the quality of their lives worsened in the past 12 months. From SWS

It used sampling error margins of ±2.5% for national percentages, ±4% for Balance Luzon, and ±6% for Metro Manila, Visayas, and Mindanao, it added.

SWS further said the survey respondents were asked: “Kung ikukumpara ang uri ng inyong kasalukuyang pamumuhay sa nakaraang 12 buwan, masasabi ba ninyo na ang uri ng inyong pamumuhay ay MAS MABUTI KAYSA NOON, KAPAREHO NG DATI, o MAS MASAMA KAYSA NOON? [Comparing your quality of life these days to how it was 12 months ago, would you say that your quality of life is BETTER NOW THAN BEFORE, SAME AS BEFORE, or WORSE NOW THAN BEFORE?].”