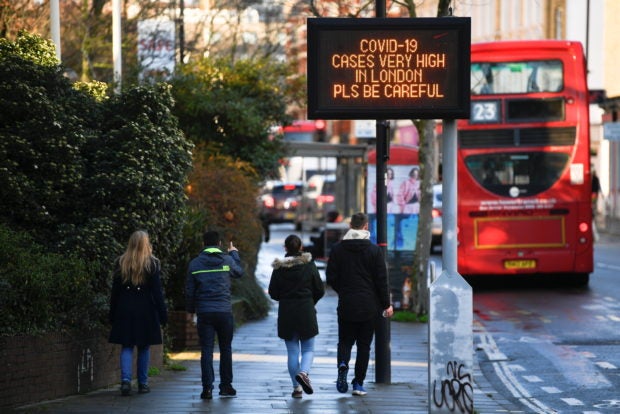 A person gestures towards a sign with a public health information message, amid the spread of the coronavirus disease (COVID-19), as new restrictions come into force, in London, Britain, December 20, 2020. REUTERS/Toby Melville

LONDON — London and southeast England may stay under tighter curbs for some time to stem a fast-spreading new coronavirus strain, Britain’s health minister suggested on Sunday, as COVID-19 cases surged by a record number for one day.

The variant, which officials say is up to 70% more transmissible than the original, also prompted concerns about a wider spread. Several European countries, including Germany, Italy, the Netherlands and Belgium, said they were taking measures to prevent people arriving from Britain, including bans on flights and trains.

On Saturday, Prime Minister Boris Johnson tore up plans to allow three households to mix indoors for five days over the festive period, and imposed new Tier 4 level curbs – similar to a national lockdown in March – on London and southeast England.

Hancock suggested the tougher measures – which require about a third of the population of England to stay at home except for essential reasons such as work – might remain in place until vaccinations become more widely available.

“We’ve got a long way to go to sort this,” Hancock told Sky News.

The number of cases in Britain surged by 35,928 on Sunday, the highest daily rise since the start of the pandemic, and it recorded 326 deaths, taking the official toll to more than 67,000.

Opposition Labor Party leader Keir Starmer told a news conference that while he supported the new measures, “yet again the prime minister waited until the 11th hour to take this decision.

“The alarm bells have been ringing for weeks but the prime minister chose to ignore them … He told the country to go ahead and have a merry little Christmas … and yet three days later he tells millions of families to rip up those plans,” he said, referring to comments Johnson made on Wednesday.

Soon after Johnson announced the changes on Saturday afternoon, some in London headed for train stations to try to travel to see relatives over Christmas, and there were scenes of crowding – something Hancock called “totally irresponsible.”

The new rules came into force on Sunday.

Transport minister Grant Shapps called on people under the new restrictions not to travel and said more transport police were being deployed to ensure that “only those who need to take essential journeys can travel safely.”

The UK’s other nations, whose response to the pandemic differs from that of England, also took action. Scotland imposed a ban on travel to the rest of the United Kingdom, effectively closing the border, and its Christmas easing will be limited to Dec. 25 only.

All of Wales will go into Tier 4 from midnight, but two households can mix on Christmas Day.

Non-essential retail stores, as well as places like gyms and hair salons, were ordered closed in the Tier 4 areas and some businesses called the new measures a “real kick in the teeth.”

Hancock said the government recognized that the economic impact of the new measures would be “severe” but that it had to weigh that against the health consequences.

The United States is monitoring the new strain in Britain, multiple U.S. officials said, adding it was unclear whether the mutated variant had made its way to America.

Other countries have also identified a new variant of the coronavirus, including South Africa.

An epidemiologist at the University of Basel in Switzerland, Emma Hodcroft, said on Twitter that the strains in Britain and South Africa were not the same.