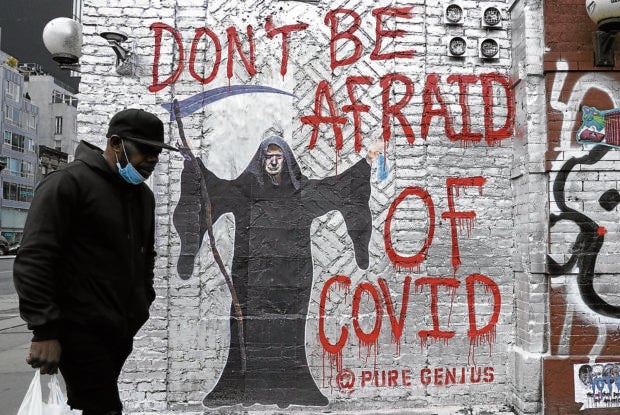 ‘SOME SAY IT’S ART’ In this Oct. 20 photo, a man walks along Houston Street in NewYork, past a graffiti by the artist who goes by the name “Pure Genius” depicting US President Donald Trump as the Grim Reaper. —AFP

Graffiti – part of New York’s history for over 50 years – is flourishing during the coronavirus pandemic, a sign of decadence for some but vitality for others.As dusk becomes nightfall, graffiti artist Saynosleep takes a quick look around and then gets to work on a luxury store closed since it was looted in June during protests over George Floyd’s death.

“If you’re not painting right now, I don’t know what you’re doing,” says the 40-year-old, adding an expletive. “There has never been a time like this.”

The facades of hundreds of stores that have shut because of the pandemic are “an invitation” to artists, says Marie Flageul, curator at New York’s Museum of Street Art (MoSA).

Walls, bridges, sidewalks and subway cars – 34 of which have been painted since the beginning of the month – are canvases.

“It’s a big surge, a renaissance of graffiti,” enthuses Saynosleep, who uses a different pseudonym for his legal artwork.

Graffiti was first accepted by the art world in the 1980s when it moved into galleries.

Expressive street art then captured the imagination of the general public in the 2000s when it went from illegal to legal spaces. But since March, it is the raw, illegal type of graffiti that has spread in a disorderly fashion.

“Everybody wants to express themselves,” says Saynosleep, who says he has seen a woman in her 60s drawing graffiti. “People are bored. They need something to do.”

The growth of the Black Lives Matter movement following Floyd’s killing at the hands of a Minnesota police officer in May has accelerated the trend, with protesters scribbling racial justice slogans and demands on buildings.

In a year when socializing has virtually stopped and streets no longer throng with activity, graffiti is artists’ way of saying, “It feels like New York is dead and you don’t see us but we are still here,” says Flageul.

The creative impulses are not to everyone’s taste, however. New York State Gov. Andrew Cuomo said the graffiti was “another sign of decay,” along with an increase in murders and shootings in New York City. “I think it’s horrible,” said Darcy Weber, who settled recently in New York. “Some say it’s art, but did they get permission for that? No, so it’s vandalism.”

For some, graffiti reminds them of the dark days of the 1970s and 1980s when New York was broke and crime was rife.

A spokesperson for the New York Police Department told Agence France-Presse (AFP) that the force was “fully aware of the importance of addressing graffiti-related crime,” and said such incidents were down 17 percent from last year.

Flageul, who is also a spokesperson for the 5Pointz graffiti collective, says it’s “a bit of a cliche” to say that more graffiti means New York is regressing.

“It costs home and business owners hundreds of thousands of dollars and tremendous efforts to erase it,” he added, drawing a distinction between “vandalism” and “amazing street murals.”

Ken Lovett, an adviser to the Metropolitan Transportation Authority (MTA) chair, noted that cleaning graffiti from trains was draining resources when the MTA was facing “the worst financial crisis” in its history.

New Jersey resident Emile Fu says he’s not too bothered. “There are other things to be concerned about,” she told AFP.

Bryce Graham, who lives in the Chelsea neighborhood, said the graffiti would shock him in somewhere like Ottawa “where everything is super clean.”

“But here in New York, it’s a hell of a mix of what is clean and what is dirty,” he said. —AFP