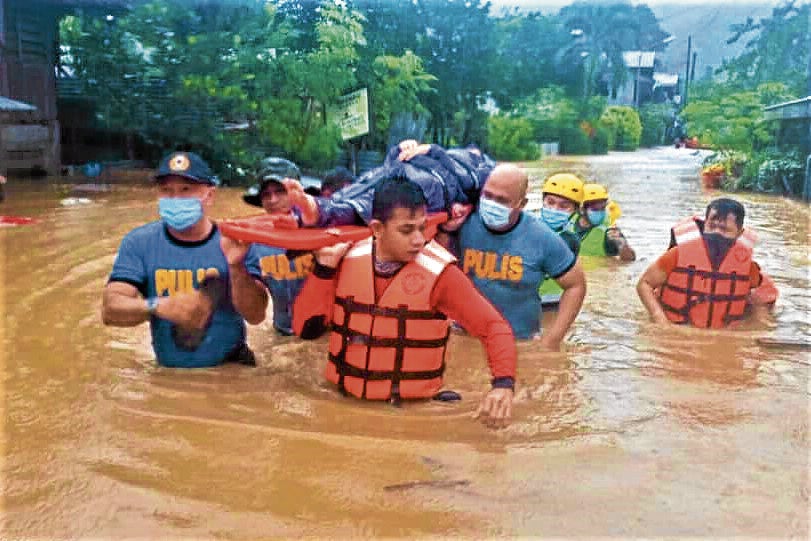 CALAMITY IN THE SOUTH A Philippine Coast Guard team comes to the aid of residents trapped in the flood at Barangays Mangagoy and Tabon in Bislig City, Surigao del Sur province, on Saturday. —PHOTO COURTESY OF PCG NORTHEASTERN MINDANAO

The rain, which began in the wee hours of Friday and lasted more than a day, was considered by local officials as the worst weather disturbance in Mindanao since the 2014 onslaught of Tropical Storm Seniang (international name: Jangmi).

Vicky also wreaked havoc in the Visayas, where it generated strong waves that destroyed a coastal settlement in Lapu-Lapu City and triggered a landslide in Leyte province.

Another resident, Verina Bughao, 68, said many of them were surprised by how fast the floodwaters rose. Ronald Pontay, 45, said that “by 11 p.m. (Friday), it got higher than my hips. It was cold; I decided to leave and head for the road with my seven children and 74-year-old mother.”

In the neighboring town of San Francisco, Elmer Luzon, general manager of the San Francisco Water District, said Friday’s rainfall reached an unusual volume of 490 millimeters at 4 p.m., from 129 mm at 6 a.m. that same day.

The volume was way above the daily average of 11 mm recorded in Northeastern Mindanao, according to Luzon, who said the water district uses rain gauges similar to those used by the weather bureau. San Francisco police reported one fatality on Saturday, identified as Francis Ian Batisting, a 29-year-old employee of the provincial government’s environment office.

Batisting and his companion, Amasona Mondejar, were on a motorbike heading to Talacogon town when their vehicle was swept off the road by raging floodwaters. Batisting’s body was later found in another village, while Mondejar was rescued by local residents.

In Leyte, officials said neighbors Evelina Larano, 67, and Junilanda Milano, 62, of Mahaplag town died in a landslide that buried their homes at Cuatro de Agosto village around 4 a.m. on Saturday.

In Lapu-Lapu City, around 6,000 people were evacuated as strong waves washed away at least 76 houses in Barangay Ibo on Friday night.

The Philippine Atmospheric, Geophysical, and Astronomical Services Administration (Pagasa) said Vicky was expected to make landfall in Palawan province around 11 p.m. on Saturday before moving toward the West Philippine Sea on Sunday.

The weather bureau said the tropical depression was 70 kilometers east southeast of Palawan’s capital, Puerto Princesa City, as of Saturday night and was moving west-northwestward at 20 km per hour.

It had maximum sustained winds of 45 kph near the center and gustiness of up to 55 kph, Pagasa said.

Vicky is expected to remain a tropical depression while crossing the archipelago and intensify into a tropical storm upon reaching the West Philippine Sea. It is forecast to be outside the Philippine area of responsibility by Monday. Weather forecasters said they were also monitoring rainfall over the eastern part of Luzon and Visayas caused by the northeast monsoon, or “amihan,” and the tail end of a cold front.