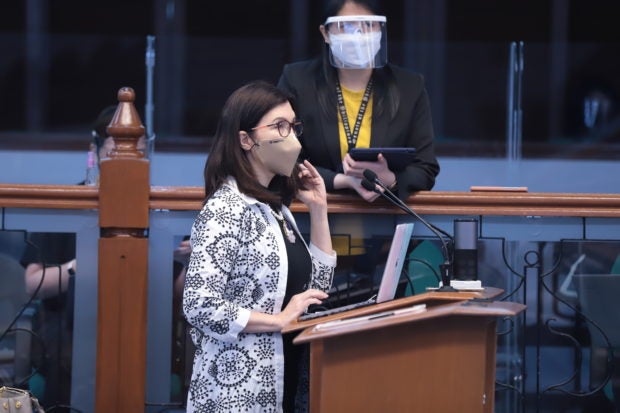 AMENDMENTS TO CREATE BILL: The Senate resumes consideration of Senate Bill No. 1357 or the CREATE Bill sponsored by Sen. Pia S. Cayetano Tuesday, November 24, 2020. The measure, formerly known as CITIRA, seeks to immediately reduce the country’s corporate income tax rate from 30 to 25 percent to help businesses cope with the COVID-19 pandemic and spur economic recovery. Cayetano said she accepted an incentive regime, as proposed by Senate President Pro-Tempore Ralph Recto, “which provides a balance between the need to, one, rationalize our incentives and, two, provide an environment to keep businesses thriving most especially amid this current pandemic.” (Henzberg Austria/Senate PRIB)

This, with the House of Representatives intending to hold a bicameral conference committee on the measure instead of adopting the upper chamber’s version.

During Wednesday’s plenary session, the last one to be held in 2020, Cayetano expressed regret that the CREATE bill would not be enacted into law this year.

“I am sad to say that there will be no immediate decrease in the corporate income tax, there will be no rationalization and certainty. What the businessmen had asked us is certainty. So that when the new year starts, they know ano papasukan nilang negosyo,” Cayetano said.

“Unfortunately, this will not happen, not because of the Senate though,” added the senator, who sponsored the bill as chairman of the ways and means committee.

Cayetano noted that when the Senate passed the measure last November, it was informed that its version would be adopted by the House. The lower chamber passed the counterpart measure last year.

“But two weeks after the passage of the bill in the upper chamber, there was no further word on this and we did not receive any official action from the House,” she said.

A bicam is called to reconcile disagreeing provisions on the House and Senate version of a bill. The proposed law will be transmitted to the President for signature only after the reconciled version of the measure is ratified by both houses of Congress in plenary.

“I would like to put on record that this delay in the passage of CREATE this year is a huge setback,” Cayetano said.

“I thank our colleagues and I thank the Senate President once again for his leadership and helping us pass this measure on our part. But that is as far as we can go,” she added.

She pointed out that the reason why the Senate held “daily” deliberations on the CREATE bill, to the “extent of setting aside” other important bills, was because the chamber “recognize[s] the importance of this bill particularly for the MSMEs (micro, small and medium enterprises) and the business sector.”

“Further, for MSMEs, if their earning is less than P5 million, they would only be paying 20 percent corporate tax,” she added.

She further noted that the “package” that the Senate came up with “was really well thought of.”

“And then, when they apply, for new applicants or those who will reapply, also very generous provisions,” she added.

Congress will go on a break on Dec. 19 and will resume session on Jan. 17 next year.