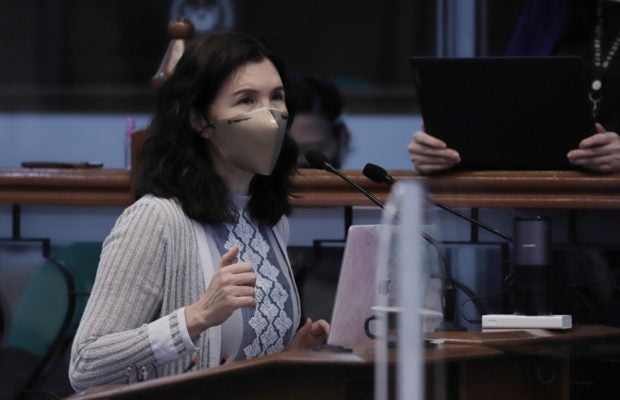 CREATE AMENDMENTS CONTINUE: Sen. Pia Cayetano, chairperson of the Ways and Means Committee, listens to amendments being introduced by Senate President Pro-Tempore Ralph Recto and other colleagues at the continuation of the deliberation on Senate Bill No. 1357 or the Corporate Recovery and Tax Incentives for Enterprises (CREATE) bill Wednesday, November 25, 2020.  (Joseph Vidal/Senate PRIB)

Senator Richard Gordon was the only senator who opposed the approval of the bill.

The said measure was certified as urgent by President Rodrigo Duterte last March.

Once enacted into law, corporate income taxes will be lowered from 30 percent to 25 percent and eventually to 20 percent by 2027.

The measure also seeks to rationalize fiscal incentives by making them time-bound and performance-based.

The Senate was supposed to approve the measure late Wednesday but agreed to defer its passage to accommodate Gordon’s amendment.

This, after Gordon aired exasperation over the authority of the Fiscal Incentives Review Board (FIRB) on the approval of tax incentives for entrepreneurs under the bill.

“It really bothers me,” he said during Wednesday’s session.

The FIRB is an existing interagency committee, headed by the Department of Finance, which currently grants tax subsidies to government-owned or -controlled corporations (GOCCs).

Under the CREATE bill, the FIRB would be empowered to approve investors’ tax perks.

On Thursday, Gordon proposed to exempt Subic Bay Metropolitan Authority and other freeport zones from the coverage of CREATE.

“The whole essence of CREATE is to be able to have all the IPAs (investment promotion agencies) accountable and to make their filings and submission to the FIRB so that the FIRB can ensure that these IPAs are being accountable,” she said.

Gordon made an appeal which prompted a nominal voting among the senators on the proposed amendment.

The proposed amendment did not prosper with only five senators voting in favor of Gordon’s proposal while 14 voted “no.”