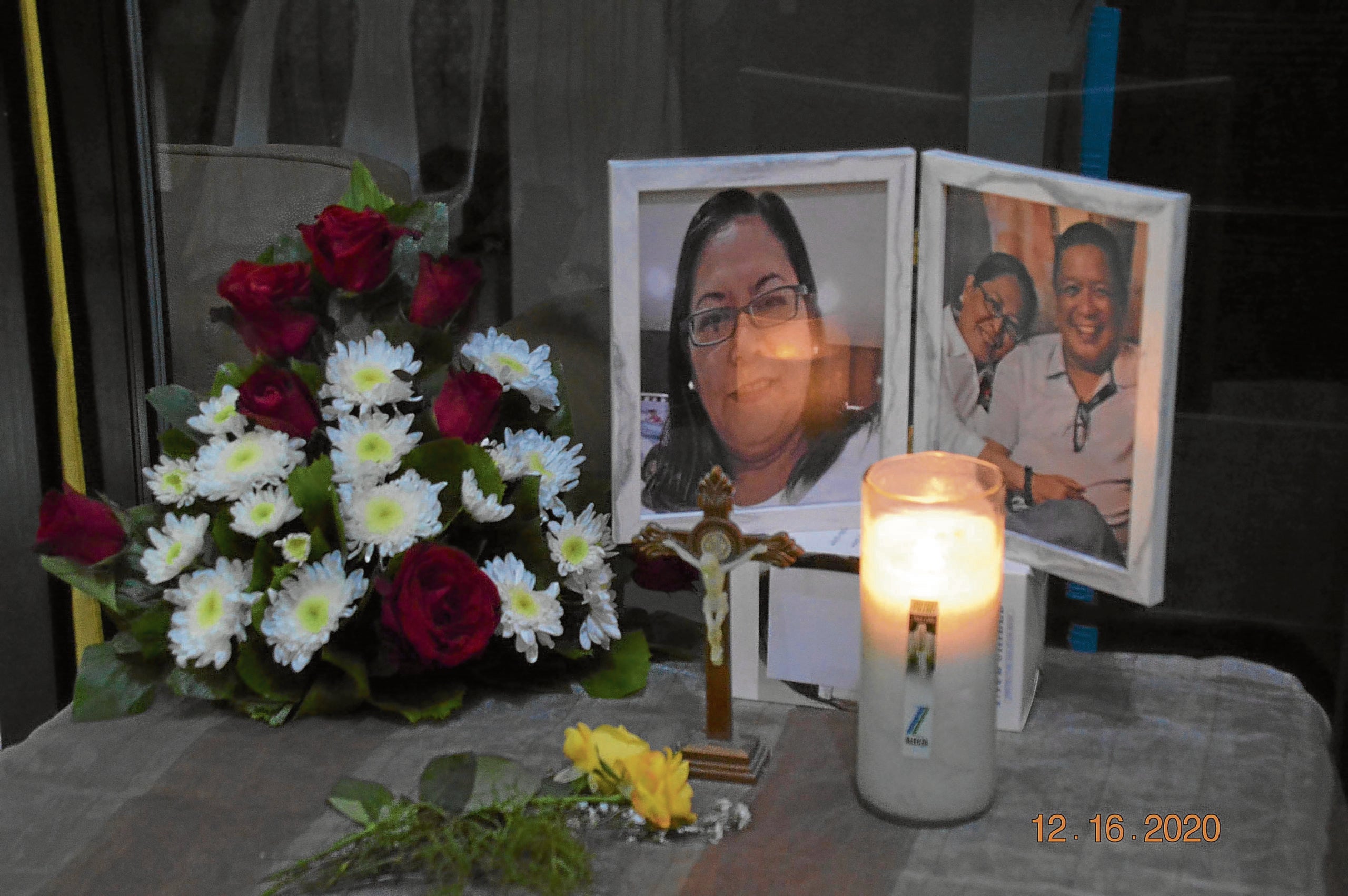 OFFICE MEMORIAL Colleagues of Dr. Mary Rose Sancelan, Guihulngan city health officer, who was shot dead by unknown killers along with her husband on their way home on Tuesday, put up their own memorial for her outside her office. Sancelan had earlier expressed fears for her life after she and other city residents were Red-tagged by a vigilante group in Negros. —PHOTO COURTESY OF ELESEO VILLAGRACIA III/GUIHULNGAN CITY GOVERNMENT

DUMAGUETE CITY—Two gunmen killed the health officer of Guihulngan City in Negros Oriental province and front-liner in the city’s fight against the COVID-19 pandemic on Tuesday, a year after she was Red-tagged by a vigilante group.

Dr. Mary Rose Sancelan, the head of the Guihulngan City Inter-Agency Task Force against Emerging Infectious Diseases (GCIATF-EID), was shot and killed along with her husband while they were going home to Carmeville Subdivision in the city’s Barangay Poblacion, police said.

Progressive lawmakers in the House of Representatives, health groups, and church leaders denounced the murder of Sancelan and her husband Edwin, saying it proved the “extreme danger” of being labeled as communists by state forces.

The killings happened on the same day that the International Criminal Court’s (ICC) Office of the Prosecutor said there was “reasonable basis” to believe that the Duterte administration committed crimes against humanity in its bloody war on illegal drugs. (See related story on Page A1.)

“It is as if the undemocratic and militarist forces in this country [are] daring the office to take action now, because these forces are protected and cannot be touched,” Bayan Muna Rep. Carlos Zarate said in a statement.

Sancelan was on top of the list of Guihulngan residents whom the anticommunist vigilante group “Kagubak” accused of being supporters of the Communist Party of the Philippines and its armed wing, the New People’s Army.

The list, which was released in 2018, identified Sancelan as “Ka JB Regalado,” who was then the spokesperson for the NPA’s Apolinario Gatmaitan Command.

Two others on the list—lawyer Anthony Trinidad and Heidi Malalay Flores—had since been murdered, and their cases have remained unsolved.

Trinidad was gunned down in broad daylight by motorcycle-riding men on July 23, 2019, while driving in the city, and his family has insisted that he had no links to communist rebels. Flores was killed in August 2018.

According to the provincial police, Sancelan and her husband Edwin, also an employee of the city government, were going home on board a motorcycle when one of two men on another motorcycle attacked them at 5:20 p.m.

The couple, who suffered bullet wounds in their bodies, were brought by rescuers to Guihulngan Hospital but were pronounced dead on arrival by the attending physician, the police reported.

“Investigators are on the ground looking for witnesses. As of now, there are no witnesses yet, but we’re looking if there is CCTV footage available from surrounding houses,” Police Col. Bryant Demot, provincial police director, told the Inquirer by phone.

Demot said that while there was no established motive yet, investigators were “considering them all.”

Sancelan had expressed fears over her safety after she was Red-tagged in a video statement sent to a peace forum in Manila in September 2019.

“I feel helpless and paranoid when I go out to work. Of course, I am afraid to die. I am no longer free to go to the countryside and perform basic services like school-based immunizations,” she said.

Her workload, she said, was heavy as the lone physician in her office doing both consultations and administrative work.

“Although she feared for her life, Dr. Sancelan chose to stay in her beloved hometown and continued to be involved in public service even after her work in the city health office,” the Council for Health Development (CHD) said in a statement.

“We are enraged that such an act of impunity knows no bounds even at a time when the whole nation is gripped by the pandemic. Her killers deprived the people of Guihulngan much-needed health services, especially in this most difficult time,” it said.

Guihulngan, 138 kilometers north of the provincial capital of Dumaguete City, has the most number of civilians killed on Negros Island since January 2017, based on records of human rights groups.

At least 88 others were detained after they were arrested allegedly on trumped-up charges, she added.

San Carlos Bishop Gerardo Alminaza called on the people to pray so that the killings would end soon. “But join me, too, in condemning, in the strongest possible terms, the senseless murder of helpless civilians and dedicated servants of government,” he said in a statement.

“What is happening? Please enough of these killings! I ask our priests, religious and faithful to offer prayers for the victims and their families and for those responsible to be held accountable,” Alminaza said.

The GCIATF-EID also mourned the death of Sancelan and her husband.

“The task force reels from the loss of a courageous and dedicated front-liner who was instrumental in placing under control the … spike of COVID-19 cases in the city last November,” it said in a statement.

While it did not mention Sancelan in its statement, the Negros Oriental Medical Society said its members were “deeply saddened by the recent event in the province.”

“This is a tragic example of the devaluation of the life of a doctor in public service. A senseless killing screams injustice and violence and goes against the very essence of a doctor—a life spent honoring life,” according to the statement issued by Dr. Joven Occeña, the group’s president.

“This decade has seen a great loss in the number of doctors. We have never been more heartbroken and cut to the deep—we fight not just an unseen deadly virus, but a living, breathing, flesh and blood enemy,” he added.

In January, the Senate committees on public order and dangerous drugs, and on justice and human rights recommended that Kagubak be investigated for the killings perpetuated by unidentified assailants.

The committees, which jointly investigated the killings in Negros, also called for an internal investigation of policemen and military personnel who were involved in purported law enforcement operations resulting in the killing of civilians for possible human rights abuses and violations of the law.

But their recommendations also included the deployment of more soldiers and policemen to Negros, which families and progressive organizations blamed for the spate of killings and human rights abuses.

“The killing of Dr. Sancelan shows how this administration would rather prioritize Red-tagging, arrests and killing human rights defenders, journalists, doctors and critics of the antipeople policies of this administration than solve the still worsening health crisis in the country,” said ACT Teachers Rep. France Castro.

Kabataan Rep. Sarah Elago said the murder of the Sancelan couple “is proof that Red-tagging poses a clear and present danger to the lives of those accused as affiliated with communist groups, and even of any Filipino as seemingly, the Duterte regime already spares no one.” —WITH REPORTS FROM JULIE M. AURELIO, PATRICIA DENISE M. CHIU AND JOVIC YEE