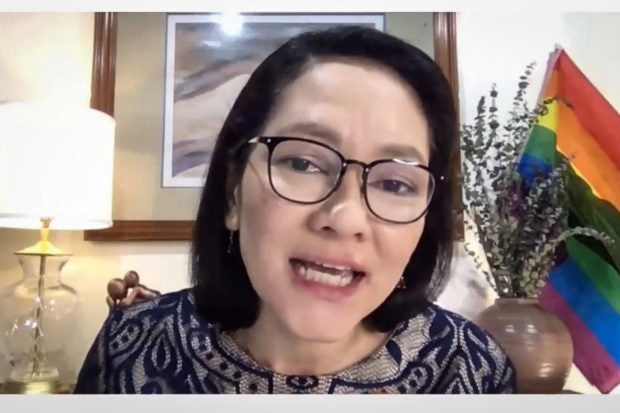 MANILA, Philippines — Senator Risa Honiveros reminded authorities on Wednesday that the vaccine for COVID-19 should be used to protect the people from the virus, and not to advance one’s political agenda.

“Let’s make it clear: The vaccine is a health solution, not a political favor. We should buy vaccines to protect our people from COVID-19. Not to advance anyone’s political agenda,” Hontiveros said in a statement.

Citing a report by the Singapore-based Yusof Ishak Institute, Hontiveros also warned officials about the possible implication of China’s Sinovac vaccine to the issue with the West Philippine Sea. According to her, the vaccine supply is “not unconditional.”

“Hindi tayo dapat basta-basta bibili ng bakuna. Do not sacrifice Filipinos’ health on the altar of the (President Rodrigo Duterte’s) bias towards China, which has continuously denied the Hague ruling and abused our waters,” she said.

(We should not be impulsive when buying vaccines. Do not sacrifice Filipinos’ health on the altar of the president’s bias towards China, which has continuously denied the Hague ruling and abused our waters.)

“This is about health, not politics. We shouldn’t entertain political favors when lives are at stake, especially not those that can be harmful to the sovereignty of the country. Hindi dapat maging kapalit ng bakuna ang pananahimik ng bansa sa patuloy na pangangamkam at pagbabastos ng China sa West Philippine Sea,” Hontiveros concluded.

The statement came after experts questioned Sinovac’s efficacy rate, which in October has submitted to the Food and Drug Administration (FDA) of the Philippines to conduct Phase 3 clinical trials for CoronaVac in the country.

The vaccine has also yet to undergo an assessment by the Health Technology Assessment Council (HTAC).

Yet despite having no reports about the vaccine’s efficacy rate, COVID-19 policy chief implementer and vaccine czar Carlito Galvez Jr. said on Monday that the government is already finalizing negotiations with the pharmaceutical company. He added that the firm vowed to supply vaccines by April 2021.

Hontiveros clarified that she sees no issues if the vaccine is safe, effective, and affordable. However, he told lawmakers to support their commitments with scientific proof. She added that it should apply not only to Sinovac but to all possible vaccine deals.

(Before we declare preference of any vaccine, I remind government that the first and only priority should be safety. Before using it to millions of Filipinos, the vaccine should be safe and without serious side effects. Every health standard and safety should be followed. It should not be rushed.)

“There are multiple and undeniable issues surrounding the vaccine offered by China, including transparency of data and results, emerging side effects as seen in Peru and even a company history of bribery. This is enough reason to worry. If we want people to trust the government’s decisions and to trust vaccination, we need to earn it. There should be no compromises. Follow the protocol,” she added.

She also questioned the basis of choosing Sinovac despite being the most expensive brand in the market with a hefty price tag amounting to P 3,629.50.

“So if it hasn’t been proven to be safe, and it isn’t even cheap, what is the basis for our preference for this vaccine?” she asked.