newsinfo / Nation
Nation
It’s a Cabinet official who 'keeps dropping the ball but stays in the game,' says senator

Lacson asks: Who ‘dropped the ball’ on Pfizer vaccine deal? 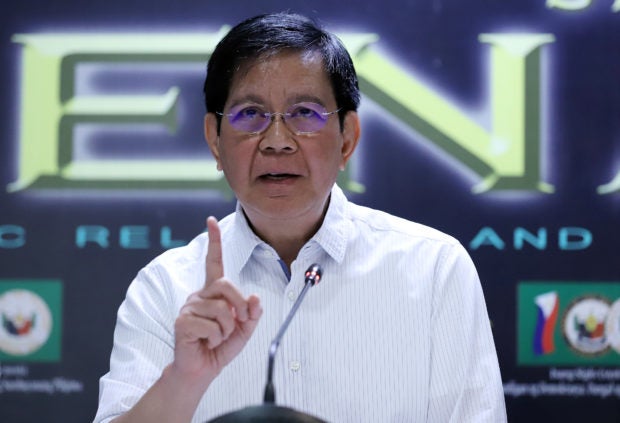 MANILA, Philippines — Who “dropped the ball” in the delivery of the Pfizer COVID-19 vaccines?

It was a Cabinet official who “keeps dropping the ball but… stays in the game,” Senator Panfilo Lacson told INQUIRER.net in a text message on Wednesday.

“The coach refuses to replace him,” he added.

Before this, Lacson asked Foreign Affairs Secretary Teodoro Locsin Jr. during a Commission on Appointments (CA) hearing for the nomination of two Philippine ambassadors earlier in the day who “dropped the ball” on the Pfizer vaccines.

In response, Locsin, who attended the hearing virtually, said: “I think it’s enough that I really lost my temper because Babe (Philippine Ambassador to the US Jose Romualdez) and I really worked very hard and we don’t like to see our efforts wasted but never mind, I don’t want to lose my temper on Zoom.”

Lacson then said that Locsin no longer needs to identify the person who “dropped the ball” since Romualdez already told him who.

“I’m just in an SMS exchange with Ambassador Babes Romualdez and you [Locsin] don’t need to tell me,” the senator said.

INQUIRER.net asked Lacson if he could identify the individual in question and whether the person is a Cabinet official.

“Cabinet syempre. Captain ball at that,” he said in response.

“You can figure that out,” he added when asked which agency this Cabinet official belongs to.

“He’s the captain ball. He keeps dropping the ball but he stays in the game. The coach refuses to replace him. The wonder of wonders!” he added.

INQUIRER.net further asked the senator whether he knows how this official supposedly mishandled the Pfizer deal but he has yet to respond.

In a series of tweets on Tuesday, Locsin said the Philippines was supposed to get 10 million doses of Pfizer’s vaccine, but “somebody dropped the ball.”

Locsin said he and the US ambassador had arranged for the delivery of the vaccine with the help of US Secretary of State Mike Pompeo.

“That said, my thanks just the same to…Pompeo. We—Babe Romualdez and I—got 10 million doses of Pfizer financed by World Bank and ADB to be shipped thru FedEx to Clark [airport] in January,” Locsin had tweeted.

On Wednesday, Health Secretary Francisco Duque III clarified that the negotiation with Pfizer for its vaccines is ongoing.

“First of all, there is no such thing as dropping the ball. If you look at the statement, the negotiations are ongoing and the DOH (Department of Health) went to the process of iteration,” the DOH chief said in a media forum.

The health secretary emphasized that the department is still reviewing the conditionalities and provisions stated in the confidentiality non-disclosure agreement (CDA) of Pfizer.

Read Next
No applications yet for emergency use of COVID-19 vaccines in PH — FDA
EDITORS' PICK
Acer starts the year off strong with the Aspire Vero National Geographic Edition
The best of bayside and city living at SMDC’s Sail Residences
EDITORIAL: Protecting the polls’ integrity
COVID-19 virus spread slowing down in Metro Manila, says OCTA Research
Over 3 Million worth of prizes to be won at Smart Padala’s SENDali Manalo Promo!
Comelec junks petition to scrap Bongbong Marcos COC
MOST READ
Drug lord Espinosa tried to escape through air vent at detention facility – NBI
In Batanes, octogenarian dies of COVID-19
When to get boosters after positive COVID test
Marcos Jr. visits Cebu, stands as ‘ninong’ to mayor’s son
Don't miss out on the latest news and information.