Cities take note: How bikes rule the roads in Portland 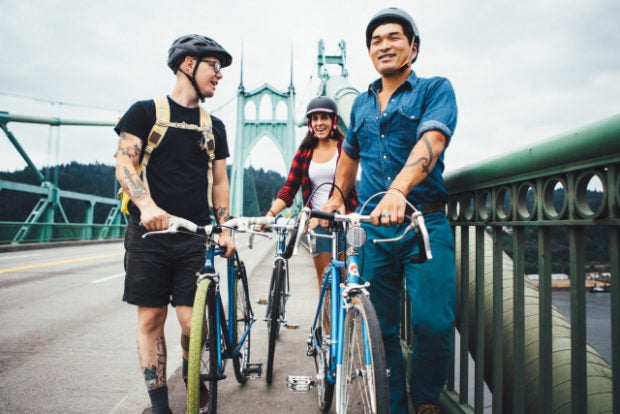 With many major European cities introducing policies to encourage cycling to the detriment of driving, the example of Portland, in the U.S., offers particular inspiration. For more than 20 years, the city has been getting residents out on their bikes by creating infrastructure (cycle lanes, bike parking, etc.), as well as offering financial incentives for individuals and businesses. And the strategy has paid off.

Portland, Oregon, was one of the first big cities in the world to introduce policies to encourage cycling over other forms of transportation, right from the early 2000s. Today, the city is home to more than 500 k.m. of bike paths, a record in the US.

As well as these dedicated paths and lanes, the city center has many “bicycle boulevards” where cyclists have priority and residential streets where speeds are limited to 30km/h for all types of vehicles. On top of that, other infrastructure has been created to allow cyclists to park their bikes easily downtown, for example, by repurposing former car parking bays.

Portland is now something of a model in the U.S., where many other cities are now trying to reduce downtown carbon emissions by encouraging people to use bikes rather than cars for getting around. Today, the city’s cycle -friendly policy is bearing fruit, since almost 10% of people in Portland cycle to their place of work, encouraged by various financial incentives and sometimes by the creation of specific parking and locker room facilities. According to the city, the number of cyclists on its streets has grown five-fold since the 1990s.

The success of cycling in Portland could offer food for thought for major European cities — like Paris, France — which are also keen to prioritize pedestrians and cyclists in their centers. In Europe, Oslo, Barcelona and Bristol are just some of the cities working to close off certain neighborhoods to cars, benefiting cyclists and pedestrians. NVG

In the Netherlands, cycling benefits the environment and life expectancy