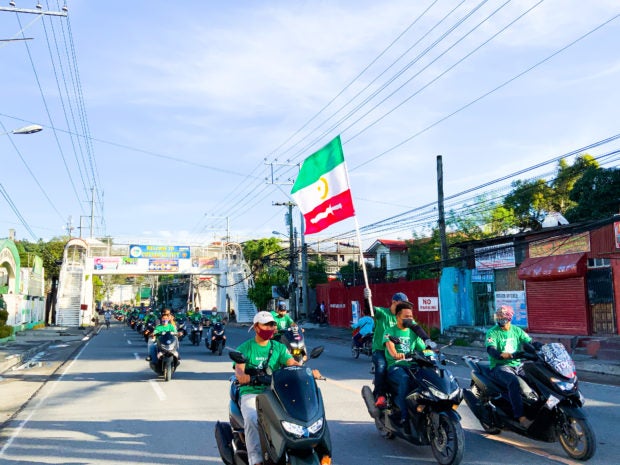 BARMM supporters go around Cotabato City on their bikes to herald the city’s transfer of supervision from the national to the regional government. SHEILA DE LA CRUZ

COTABATO CITY –– Supporters of the Bangsamoro Autonomous Region in Muslim Mindanao (BARMM) organized a motorcade on Tuesday morning, Dec. 15, to herald the turnover of Cotabato City’s supervision from the national government to the regional government.

Wearing green shirts with “Cotabato City, welcome to BARMM” prints, the motorcade snaked through the city’s major streets while some residents played the Bangsamoro Hymn.

Mohammad Menang, who organized the motorcade, said they followed the minimum health standards and the city’s guidelines to prevent the spread of the coronavirus disease (COVID-19).

(We are happy to finally see the product of our ‘Yes vote’ during the plebiscite [in 2019].)

The motorcade participants chanted “Allahu Akbar” (God is great) when they passed by the City Plaza and City Hall while holding the BARMM flag.

The majority of the city’s voters opted to be included in the BARMM by ratifying the Bangsamoro Organic Law (BOL) during the January 2019 plebiscite.

In compliance with that mandate, the national government is turning over the supervision of the city to the BARMM in simple rites at the Shariff Kabunsuan Cultural Complex this afternoon.

BARMM Interior and Local Government Minister Naguib Sinarimbo said they have already coordinated with the police and military to ensure security during the ceremony.

“We are confident we have put in place the appropriate security measures,” Sinarimbo said.

Cotabato City Mayor Cynthia Guiani-Sayadi, who is opposed to the handover, said it’s “business as usual” in the city government.

Dr. Danda Juanday, Cotabato City administrator, confirmed that Mayor Sayadi opted not to appear in the turnover ceremony since Sayadi had questioned before the Supreme Court the plebiscite result.