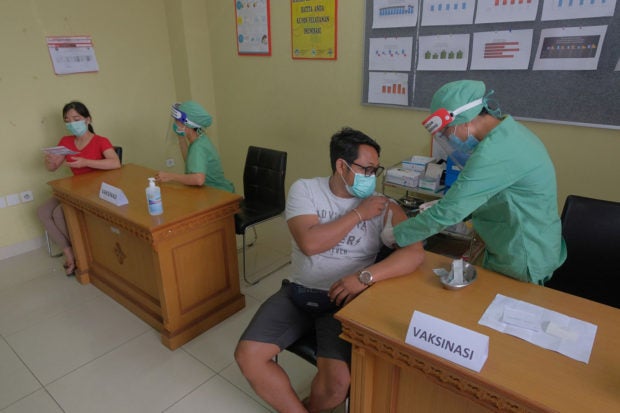 Medical workers administer shots in a simulation of the COVID-19 vaccination program in Badung, Bali, on Oct. 6. Antara/Nyoman Hendra Wibowo via The Jakarta Post/Asia News Network

JAKARTA — The Indonesian government will prioritize Java and Bali islands for the first round of vaccination programs due to their high number of COVID-19 cases.

“Out of the 10 provinces with the most confirmed cases, most of them are in Java and Bali islands,” national vaccination program spokeswoman Siti Nadia Tarmizi said on Wednesday as quoted by tempo.co.

According to National Disaster Mitigation Agency (BNPB) data on Dec. 9, active cases in seven provinces in Java and Bali had reached 50,892, totaling 376,112.

Siti Nadia said the high number active cases was triggered by dense populations in the said regions, adding that 60 percent of the country’s 267 million population resided in Java and Bali.

National COVID-19 task force spokesman Wiku Adisasmita said administering vaccines to people in high-risk red zones was expected to curb virus transmission, adding that vaccination was not only aimed at saving a life but an entire population.

Therefore, Wiku reminded the public to limit their mobility while continuing to comply with strict health protocols prior to and after the national mass vaccination program.

“If the public neglects the health protocols, we will surely have case spikes,” he said, adding that the vaccinations would not guarantee an end to the pandemic.

“[We cannot] administer shots on random people but must instead [ prioritize] certain people based on risk zoning,” he said.

In the first phase of the national vaccination program in Java and Bali, the government is to utilize 1.2 million doses of a COVID-19 vaccine produced by China’s Sinovac Life Science Corp. Ltd., which arrived in Indonesia on Dec. 6.

In total, Indonesia has secured 3 million doses of the Sinovac vaccine, in which the remaining 1.8 million doses are to reach the country in January.

Bio Farma president director Honesti Basyri said he had also communicated with Pfizer and AstraZeneca for a possible future arrangement. Meanwhile, with Novavax, the company had signed a commitment for vaccine procurement.

“With Novavax, we have a commitment [to buy] 30 million doses, which we will further discuss,” he added. Health Minister Terawan Agus Putranto said the mass vaccination program would be immediately conducted as soon as the Food and Drug Monitoring Agency issued emergency use authorization for the vaccines.