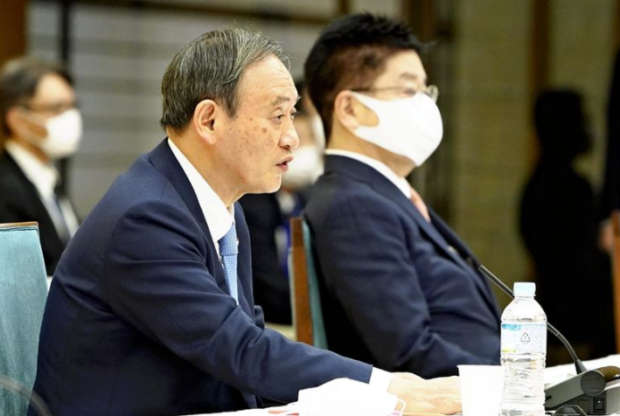 Prime Minister Yoshihide Suga, left, speaks at a Dec. 1 meeting of the government’s growth strategy council, where ways to realize net-zero emissions of greenhouse gases by 2050 were discussed. The Japan News/Asia News Network

TOKYO — The Japanese government has decided to stipulate in law its goal of achieving virtually zero greenhouse gas emissions by 2050, The Yomiuri Shimbun has learned.

Through the unusual move of incorporating a long-term goal into legislation, the government hopes to demonstrate, both inside and outside Japan, its determination to promote net-zero carbon emissions by 2050.

The Environment Ministry plans to include “zero emissions by 2050” in the law concerning the promotion of measures to fight global warming. The government’s policy will be discussed at an expert panel meeting scheduled to be held as early as Dec. 21.

A bill to revise the law is planned to be submitted to next year’s ordinary Diet session.

The government’s medium- and long-term targets for global warming have so far been included in implementation plans based on the law. The current plan compiled in 2016 stipulates that greenhouse gas emissions will be reduced by 26% by fiscal 2030 compared to fiscal 2013, and by 80% by fiscal 2050.

The latest move will make the goal of eliminating greenhouse gas emissions by 2050 more binding, as a Diet decision is required to revise a law, whereas implementation plans are finalized at cabinet meetings. Even when a change of administration takes place, the policy will likely remain due to the revision of the law, according to sources close to the matter.

The government hopes to convey to the international community that Japan is an environmentally advanced country at the 26th Conference of the Parties of the United Nations Framework Convention on Climate Change, to be held in Britain in November next year.

The revised law will clearly state the 2050 deadline and stipulate that a decarbonized society will be realized, referring to net-zero emissions in which the emission of greenhouse gases and the absorption of such gases through forests or other means are equalized.

The revision also will include goals of the Paris Agreement, an international treaty on climate change that aims to limit global warming to well below 2 C, preferably to 1.5 C, compared to pre-industrial levels.